Innovation takes the stage at INTERMAT 2015 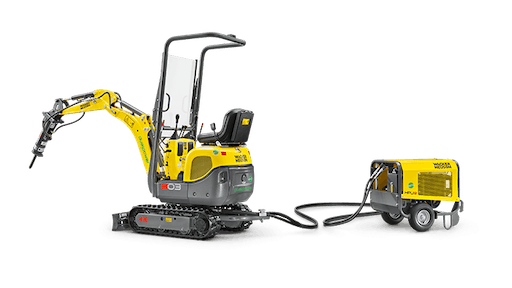 Wacker Neuson's dual power 803 mini excavator can operate via its integrated diesel engine, or electrically when hooked up to the HPU8 electro-hydraulic generator.

INTERMAT, the International Exhibition for Equipment and Techniques for Construction and Materials Industries, is set to take place once again April 20 to 25 in Paris, France. Held once every three years in rotation with CONEXPO and bauma, the show highlights the latest technologies and services the international construction industry has to offer.

The last edition of INTERMAT was its largest in history with over 200,000 visitors and 1,350 exhibitors attending the show. Organizers of the event anticipate the 2015 show will be even larger due to a new layout of the exhibition floor that will accommodate an anticipated 1,500 exhibitors; as of November 85% of the exhibit space was already filled.

As part of its efforts to highlight industry advancements, each edition of the show includes the INTERMAT Innovation Awards which are given out three months prior to the show and are open to exhibitors. The objective of these awards is to honor manufacturers’ R&D efforts, as well as pay tribute to innovation in equipment and techniques for construction. Winners are selected by an international judging panel consisting of 11 industry specialists and chaired by Bruno Cavagne, President of FNTP (France’s National Federation of Public Works) which also helps organize INTERMAT.

Seventy-eight applications were submitted for the 2015 awards, of which 29 were nominated for awards by the judging panel and 12 were ultimately selected as winners. To be selected as a winner, the product or service must be innovative or display an unprecedented level of perfection. Additionally, it must demonstrate a contribution to technical design and technology or in cost savings, operation, usage or environmental sustainability. It must also comply with French and European regulations and standards.

View the full press release from INTERMAT to learn more about the Innovation Awards, judging criteria and the judging panel.

“The list of our 2015 award winners, in line with those of previous editions, bears the hallmark of a wider diversity whilst remaining focused on the permanent challenges of public works contractors, such as the safety of workers and environmental protection,” said Cavagne in a press release announcing the winners. “However, we can also note the emergence of new avenues of innovation connected to digital such as the management and capitalization of data and the management of work site processes.”

And the winners are…

The Innovation Awards are typically given out in five categories: Raw Material Extraction, Construction Equipment, Equipment & Components, Engineering & Systems and Digital Applications. Within these categories, up to three awards can be given with the designation of Gold, Silver and Bronze awards. However, if there are no entries for a category or entries the judging panel does not deem innovative, it will forgo assigning an award for that category and instead give out a “judges’ special award.”

Two special awards, the Environment Award and the World of Concrete Europe Award, are also given out as part of the INTERMAT Innovation Awards. Entries from any of the categories are eligible to receive these awards.

Reducing emissions with a dual-power system

Wacker Neuson Group’s dual power 803 mini excavator was recipient of the Gold Award in the Construction Equipment category. The excavator can operate using either the integrated diesel engine or electrically by connecting it to the company’s HPU8 electro-hydraulic generator. Doing so enables emissions-free operation, which is particularly beneficial for indoor applications to ensure the safety of workers on the job site. It also helps reduce noise levels, enabling the excavator to be used in environments where noise might be an issue such as residential areas or hospitals.

Recipient of the Silver Award within the Equipment & Components category was Mecalac’s M-Connect quick coupler. The quick coupler is designed to make tool attachment easy for the operator, as well as ensure the tool does not come loose. According to the company, it was the first OEM to make quick couplers standard on its equipment.

With the M-Connect quick coupler, operators are able to attach tools from their seat within the machine cab. Buckets and tools from Mecalac feature a hook-shaped hanging system which enables coupling via two pins at the end of the machine’s boom. A hydraulic cylinder connecting the two pins is what attaches a work tool to the boom; outward movement of the cylinder attaches the tool while inward movement releases it. The hook-shaped hanging system, meanwhile, ensures the tool does not fall during attachment by preventing the pin attached to the tool from falling out while the tool is suspended in the air. A sensor within the operator cab indicates when the tool has been locked in place correctly.

The Merlo transversal stability system (M TSS) was named winner of the Gold Award within the Engineering & Systems category of the Innovation Awards. Through the use of an LCD display, light indicator and a buzzer, the system prevents lateral overturning of a telehandler by providing the operator with real-time feedback on the lateral stability of the machine.

The system is completely automatic and capable of recognizing attached implements, weight of a load, boom geometry and total balance of the machine. M TSS includes a back lateral and longitudinal stability management system to help ensure all aspects of vehicle stability are accounted for; parameters such as wheel loads, boom position, extension and angles, as well as lifted loads and chassis tilt angle are all monitored 100 times per second. If the system detects an issue, it either alerts the operator or prevents movement that would compromise the stability of the vehicle.

Comprised of various sensors, cables and the cab-mounted operator display, M TSS will be included in all base models of the latest generation of Merlo telehandlers at no extra charge to customers as a means of helping increase safety standards.

Winner of the Silver Award in the same category was the Liebherr Demolition Control (LDC) system which enables the operator to always see the position of the demolition attachment and guarantee the stability of the machine.

As Liebherr developed the system, it wanted to ensure proper integration into the electronics system, as well as simplify machine manipulations for operators. To achieve these goals, the LDC system is designed to automatically recognize attachment lengths and uses integrated angle sensors to monitor the position of the machine. Additionally, information on various types of tools and their weight were integrated into the system’s cab-mounted display. Performance of the excavator itself was also optimized by extending its reach.

Liebherr’s ultimate goal for integrating LDC into its demolition machinery is to help eliminate human error that could affect machine stability. The system includes a tactile color display to provide the operator with a real-time animation of the position of the machine’s attachment. Also shown on the display are authorized movements of the attachment, as well as a position of the machine itself. Liebherr’s R960 Demolition machine featuring the new LDC system will be displayed at the company’s booth during INTERMAT 2015.

Read the full press release to learn more about all of the winners, and nominees, for the 2015 INTERMAT Innovation Awards. 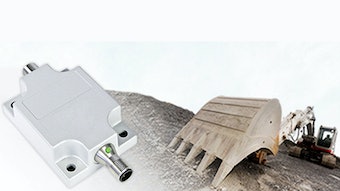