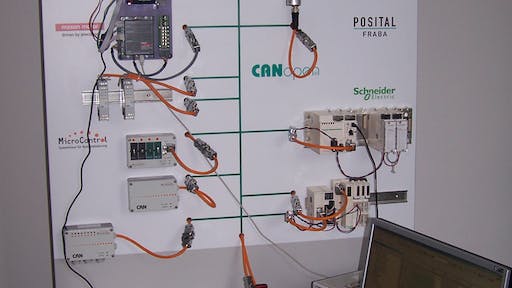 CAN in Automation (CiA), the international users’ and manufacturers’ group, tests the interoperability of CANopen devices. Faulhaber’s MCBL300 motion controller is the first CANopen device, which has passed this test. In opposite to the CANopen conformance test, the interoperability test is a system approach. The device-under-test (DUT) is proofed in the “golden” CANopen network installed in the association’s laboratory. The test procedure assures that CANopen devices are capable of interacting with a variety of other products from different manufacturers, all integrated into the same test stand (see photo). It also includes some stress tests in order to proof that the DUT runs even at high busloads or with long bus-lines, for example.

CiA also organizes so-called plug-fests, during which manufacturers connect ad-hoc their CANopen devices to test interoperability between different products. The next CANopen plug-fest will be dedicated for CANopen Safety products. The interoperability of CANopen Safety devices is not in the scope of the functional safety testing and certification by national authorities.

The test will explore how to mature the technology and gather vital feedback from operators on the optimum placement of cameras for handling precision.
Volvo Construction Equipment
December 2, 2021

MacLean will use several of Freudenberg's XMP76P battery sub-packs in series to provide energy levels of more than 106 kWh.
Freudenberg-NOK
November 1, 2021
Electronics

The complementary engineering capabilities and application expertise of the two companies will help drive deeper engagement with customers and serve as a platform for future growth.
Carling Technologies
November 1, 2021

The on-board chargers convert the alternating current from the charging station into direct current and provide communication between the vehicle and charging station.
BMZ Group
November 1, 2021
Follow Us