In 1950 when LeTourneau unveiled the technology, it was a breakthrough. 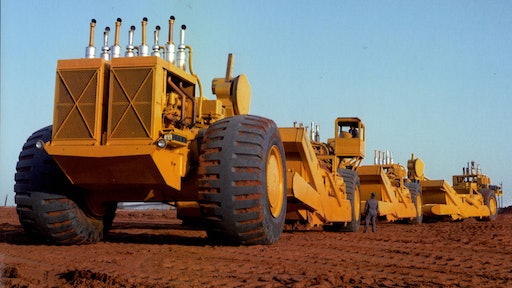 The immense Series LT-360 (Model A-8) electric-digger. Imagine the fuel bill at more than $5.00 per gallon for eight 16-cylinder diesel engines on one machine. Rising fuel costs contributed to the demise of many of Mr. LeTourneau’s multi-engine ideas.
R. G. LeTourneau Inc., image courtesy of Eric C. Orlemann

The most efficient means of powering a device varies with need, practicality and available technology. One example is the crowd mechanism of a steam shovel. This mechanism moves the dipper stick in and out through the boom. It could be powered by a steam engine on the boom that received steam by lines from the boiler or by chains or cables operated by a steam engine elsewhere. When internal combustion rendered steam obsolete, the latter became standard. No shovel was ever built with a gas or diesel engine out on the boom or a drive shaft along the boom.

Part of the logic behind the introduction of the electric shovel in 1919 was to replace the boiler, steam lines and the steam engines at different locations on the machine with a central motor/generator and electric motors at those positions. The result was far greater operating efficiency and the elimination of the costs incurred by steam operation. In 1919, emissions control was an incentive only in confined areas, such as tunnels and industrial settings.

Early, Robert G. LeTourneau recognized the advantages of electricity to power other types of earthmoving machinery. His self-propelled scraper of 1923, the world’s first motor scraper, was powered by a gas generator and seven motors placed at all points on the machine that required power. Even though it was efficient, the self-propelled scraper was shackled by a travel speed of one mile per hour because of the limitations of technology in the 1920s.

LeTourneau returned to the idea of electric power in 1944 with motors and electric controls on some Tournapull prime movers and their attachments. The first application for this technology was to control steering. The operation of scraper winches followed. The next breakthrough came in 1948, with experiments in electric propulsion using motors attached to the axle housings of a Model-D Electric Tournadozer, a small wheel dozer.

The big innovation came in 1950 when LeTourneau unveiled his electric wheel. The traction motor was mounted directly into the hub of the wheel being powered. Because of this, the cost, weight, limitations and inefficiencies of a mechanical drive train were eliminated. The power train consisted of a gas, diesel or butane engine powering a generator and the electric wheels.

The first machine to use the electric wheel was the all-wheel-drive, all-wheel-steer Tournatow. The main customer for these low-profile wheel tractors was the U. S. Armed Forces. One use example for the military was aircraft tugs.

The Tournatow was followed by several machines for many applications including:

The consummate machine powered by the electric wheel was the colossal Series LT-360 (Model A-8) electric-digger motor scraper. The largest and most powerful scraper ever built, it had three 72-yard, 120-ton capacity bowls. It rode on eight 60 x 68, 72-ply, 122-inch diameter tires, each mounted on an electric wheel. The four axles were arranged at the front and rear ends and at each end of the middle bowl. Two 635-hp Detroit Diesel 16V-71N engines were mounted at each axle, totaling 5,080 hp.

The operator sat in an elevated cab between the first and second bowls. At 200 feet long and 19 feet wide, it may have been too big. While it performed well on the proving ground, no sales resulted. The one unit that was constructed was broken up and cannibalized to build other, smaller—but still huge—scrapers.

Was the LT-360 too big? Not in Mr. LeTourneau’s mind. His philosophy was that there was never a job too big, just machines that were too small. Before he died, he drew up plans for an even bigger scraper, the 500-ton, 9,600-hp LT-500!

The HCEA is a 501(c)3 non-profit organization dedicated to preserving the history of the construction, dredging and surface mining equipment industries. With over 3,800 members in 25 countries, HCEA activities include publication of a quarterly educational magazine, Equipment Echoes, from which this article is adapted; operation of National Construction Equipment Museum and archives in Bowling Green, OH; and hosting an annual working exhibition of restored construction equipment. The next International Convention and Old Equipment Exhibition will be September 23-25, 2022, at the National Construction Equipment Museum in Bowling Green, OH. The HCEA is raising funds for construction of a new purpose-built building to house its equipment collection, and the convention will feature groundbreaking for it.

Individual annual memberships in the HCEA are $35.00 within the USA and Canada, and $55.00 U.S. elsewhere. HCEA seeks to develop relationships in the equipment manufacturing industry, and offers a college scholarship for engineering and construction management students. Information is available at www.hcea.net, by calling 419-352-5616 or e-mailing info@hcea.net.