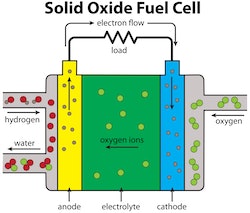 SOFCs can convert fossil fuels into energy much more efficiently than combustion-based processes and can also use low- and no-carbon fuels such as hydrogen to generate power. They have the potential to be a bridge to a carbon-neutral future and much more.

“We need every tool we can get to address the world’s climate challenges and other environmental issues,” says Thad Ewald, Vice President of Corporate Strategy at Cummins. “Solid oxide fuel cells give our customers another way to achieve their environmental sustainability goals.”

SOFCs use a ceramic electrolyte to convert the energy in a fuel to power through a series of electrochemical reactions. With a continuous supply of fuel and oxygen, the fuel cells can be linked or stacked together to power a variety of applications.

Compared to combustion processes, SOFCs are capable of converting a significantly higher percentage of a fossil fuel’s energy into electricity while producing far less heat-trapping gases and emissions than an internal combustion engine using a petroleum-based fuel, or a coal-burning power plant.

Advocates envision a day in the near future when solid oxide fuel cells regularly power major energy users like data centers, removing them from an increasingly over-burdened electrical grid.

The grants from the U.S. Department of Energy (DOE) will help fund two projects demonstrating SOFCs’ potential. A $2.6 million DOE grant will help Cummins build a 20 kilowatt (kW) small-scale SOFC power system at the University of Connecticut, fueled by natural gas but able to use multiple fuels. It will run 5,000 hours to demonstrate its durability.

That’s not a big enough SOFC system to power a data center but systems can be aggregated together to provide energy resiliency, security and availability, sufficient for not only data centers but other commercial and industrial applications and microgrids, too.

A second project funded with the help of a $2 million DOE grant will look at the cost, performance and reliability of a reversible fuel cell or R-SOFC. It can run as a traditional SOFC or as a solid oxide electrolyzer cell (SOEC) that can split steam to separate hydrogen and oxygen.

Cummins is quickly emerging as the leader in SOFCs for commercial and industrial power. The company’s novel spray technology, for example, enables Cummins to achieve larger cells, higher power densities, increased reliability and lower costs. The company’s cell and stack size reduces system costs and complexity while providing a modular building block suitable for a variety of applications. The company also uses commodity stainless steel in its cells rather than more expensive and brittle ceramics used by some competitors.

The company’s work on SOFCs is consistent with PLANET 2050, Cummins’ environmental sustainability strategy adopted in 2019 to address climate change and other environmental issues. The strategy includes science-based goals aligned with the Paris Agreement to limit global temperature rise to no more than 1.5 degrees Celsius by the middle of the century.

Cummins discusses its battery, hydrogen and engine system developments and how they will continue to advance in the off-highway equipment industry.
Sara Jensen
December 14, 2021
Follow Us