C&K Components has opened a new office in Shanghai, China, to better serve its customers in the Asia. 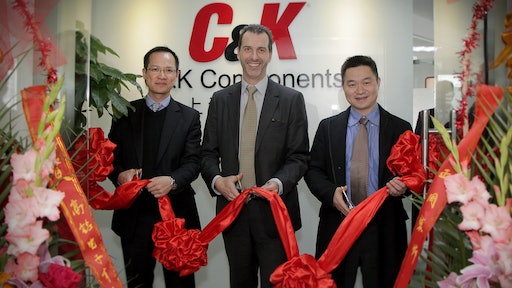 C&K Components has announced the opening of a corporate office in Shanghai, China, as it expands its global sales coverage throughout Asia.

"This new office in China represents another key milestone for C&K in Asia, as we continue our expansion in the Chinese market. Choosing Shanghai's location is directly linked to C&K's strategy toward the automotive market segment. As a key supplier to the automotive industry in Europe and the Americas, and our large R&D and manufacturing site fully qualified for automotive industry standards, the next logical step was to open an office primarily focused on automotive," says Fred Chevreton, Chief Executive Officer at C&K Components.  "Because Shanghai is a central hub for the Chinese automotive industry, we are now able to better serve locally all of our customer needs in this rapidly-developing but also very demanding market segment.”

Both Chevreton and C&K's Asia general manager William Xu attended the formal opening of the Shanghai office, along with several of C&K's partners.

With this most recent expansion, C&K is increasing both sales and field application engineer resources to serve the needs of its Chinese customers.