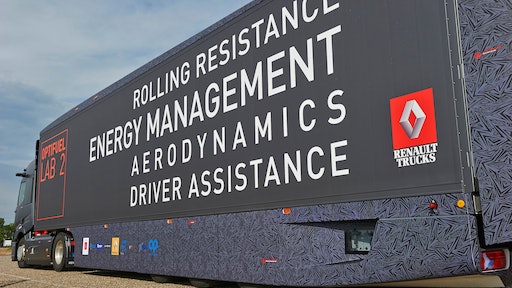 Reducing fuel consumption was the core concern behind the development of the Renault Trucks T with the aim of making it a profit center for haulers. Now, Renault Trucks is looking to the future as it continues its research in this area by studying all possible avenues enabling it to reduce a haulage rig’s consumption. This research is being carried out on a laboratory vehicle, Optifuel Lab 2, based on a Renault Trucks T, as an ongoing version of the Optifuel Lab 1 introduced in 2009. The project has been developed with support from eight partners: Plastic Omnium, Michelin, Sunpower, Renault, IFP Energies Nouvelles, CEP-Armines, CETHIL-INSA from Lyon and LMFA-Ecole Centrale from Lyon. It is also supported by ADEMA, the French Agency for the Environment and Energy Control.

Optifuel Lab 2 has 20 technologies on board, each of which addresses the four main issues associated with consumption: energy management, aerodynamics, wheel resistance and driving aids. Claude Covo, the project director, presents the main technologies developed with this mobile laboratory.

The focus of the research work being carried out with Optifuel Level 2 is to optimize the management of various sources of energy. “The idea is to take as little energy as possible from the internal combustion engine,” explains Covo. “We therefore electrically powered several of the vehicle’s auxiliary items of equipment such as the air-conditioning, water pump, fuel pump and the steering pump. We then multiplied the sources of electrical
energy for power units by adding solar panels and installing an exhaust gas heat energy recovery system based on the Rankine cycle.” When the vehicle’s driver calls for energy, a computer analyzes the needs, finds the most readily available and efficient source (solar, Rankine, etc.) and distributes it in real time. “Optifuel Lab 2 operates in response to the supply and demand of an energy market,” explains Covo. “The more energy there is available at low cost, the more it will be used.”

By giving priority to its “free” sources such as solar energy or exhaust gas heat, Optifuel Lab 2 limits use of energy produced by the combustion engine’s alternator, thereby reducing fuel consumption by the same amount.

Running parallel with this advanced energy source management, Renault Trucks has also been working on limiting the vehicle’s needs. To achieve this goal, particular attention has been paid to insulating the cab. The glazed areas use a special type of glass with greater insulating properties, while on the roof there is an adjustable roof deflector. When the vehicle is at a standstill, the deflector unfolds to protect the cab from the sun while an air extractor powered by its own solar panel removes the warm air inside the cab. When the vehicle starts, this folds down to improve the vehicle’s aerodynamic performance.

Furthermore, to cool the cab, Renault Trucks has installed air conditioning entirely powered by energy from its solar panels. The system can therefore produce cooled air even when the vehicle is stationary and the engine is not running.

The solar panels equipping the Optifuel Lab 2 rig have been specially designed for this project. They are required to meet particular constraints. “The solar panels had to follow the trailer’s curved profile so that they would not interfere with the vehicle’s aerodynamics,” says Covo. “However, at the same time, they had to be able to cope with the conditions a truck meets on the road and any incidents that might occur. We could not therefore use standard panels.” The solar panels developed for Optifuel Lab 2 are therefore light in weight, deformable, equipped with 48 modules covering an area of 40 m² and generate 30% more power than standard panels.

Despite the ongoing improvements to diesel engines, some of the energy they use is lost in the form of heat. Renault Trucks has therefore developed a system to recover the heat contained in exhaust gases. The idea is very simple: convert the heat of exhaust gases into electrical energy. “Technically speaking, the system operates on the basis of the Rankine cycle,” explains Covo. “The calories in the exhaust gases are recovered via an
exchanger, vaporizing the working fluid and using this vapor to drive an electric generator.” This gives the vehicle a new source of electrical power, thereby reducing demands on the conventional alternator.

“The work done on aerodynamics for the Optifuel Lab 2 concerned the entire rig including the truck and its trailer,” stresses Covo. “We worked on the perfect matching of the two elements to reproduce the water drop effect, reducing the aerodynamic wake and thereby cutting consumption.” The roof mounted mobile deflector, open when the vehicle is stationary to better insulate the cab, folds down at speeds above 50 kph. This gives it perfect continuity with the trailer. The water drop effect is increased by the roof’s curved form, the 70 cm side deflectors at the rear and the lateral fairing along the side of the trailer. It should also be noted that the rearview and forward view mirrors have been replaced by cameras flushed with the body to further limit areas of turbulence and make sure the air flows perfectly over them.

Optifuel Lab 2 also has a mobile spoiler at the base of the radiator grille. When unfolded, it allows the air passing under the truck to flow more freely and limit rubbing under the chassis. This spoiler folds away automatically below 50 kph to prevent it from being damaged at slow speeds if negotiating a speed bump or a delicate passage for example.

As an extension of aerodynamic considerations, the Renault Trucks engineers also focused on the rig’s rolling resistance. To this end, they used an original solution which constantly adapts the level of oil in the drive axle according to its needs for lubrication and cooling. When the vehicle is working hard and needs torque, the system increases the amount of oil in the drive axle. When it is rolling at a stable speed and the drive axle has less need of being lubricated and cooled, the amount is reduced. The oil is stored in a separate section of the drive axle’s main tank. This enables the system to limit energy losses caused by oil swilling.

Optifuel Lab 2 is also equipped with prototype tires specifically developed by Michelin. They have been optimized to have low rolling resistance so that they can significantly contribute to reducing fuel consumption.

The driver remains the key factor when it comes to reducing consumption. Driving style can have an influence of more than 3 l per 100 km in terms of consumption. The Optifuel Lab 2 engineers did not overlook this and developed specific driving aids. Optifuel Lab 2 is therefore fitted with an adaptable speed limiter.

Fitted with its own GPS, the limiter calculates the best speed that should not be exceeded according to the truck’s position and road profile in real time and in anticipation. “In concrete terms, the system can override the speed instruction given by the driver to anticipate an uphill or downhill section,” says Covo. “Everything is done instantaneously.”

Similarly, the accelerator pedal also adapts to the situation. The pedal offers more or less resistance depending on the driver’s need to accelerate or slow down. If the system detects a roundabout coming up for example, or the end of an uphill section of road, the pedal will become more resistant and make the driver slow down. When the system is operating, the driver is informed by an icon displayed on the dashboard and an illustration of the upcoming event (roundabout, uphill section, downhill section, tollbooth, etc.). With this aid, drivers always know how to adapt their driving so that it can be as favorable as possible to reducing fuel consumption.

With Optifuel Lab 2, Renault Trucks benefits from an on-road laboratory enabling it to continue its research and test various technologies designed to further and constantly reduce consumption.

Just as several technologies from Optifuel Lab 1 have been reused on production vehicles in the new Euro 6 range, some of those featured on this second experimental vehicle are designed to be made available on future production models.

Finally, Renault Trucks’ concern is always the same: to develop and offer its customers vehicles that continually use less and less fuel.