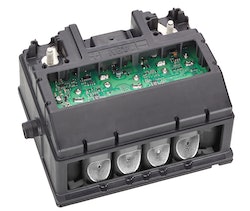 The German government has brought in a law on autonomous driving that creates conditions for the regular operation of autonomous vehicles in various mobility sectors. In doing so, Germany is assuming a pioneering role and contributing to the future regulation of autonomous driving. The safety of autonomous vehicles is of the highest priority. Eberspaecher’s electronics solutions contribute significantly to this and ensure a stable vehicle electric system as well as a reliable power supply for the relevant systems.

In the future, autonomous vehicles will be used in more and more areas of everyday mobility. This is what the German government’s new law on autonomous driving aims to achieve. Autonomous vehicles up to SAE level 4 are to be used, for example, as automated passenger transport systems for certain routes, shuttle transport, or driverless connections between logistics centers. A key requirement for the autonomous vehicles that will be used in these capacities is their safety: In the event of an error, unobstructed functionality and availability of the relevant components must be ensured until the driver takes control or the vehicle has brought itself to a safe state. Some examples of what is included here are the brakes, steering, and sensors. Since these systems are electrically operated, the stability of a redundant vehicle electric system and its secured power supply play a central role.

Eberspaecher offers a wide range of solutions in the area of power electronics that contribute to safety in autonomous driving: Semiconductor-based disconnecting and changeover switches provide redundant vehicle electric system protection in autonomous vehicles up to SAE level 5. Battery management systems ensure the energy source operates reliably. This makes it possible to predict the availability of the necessary energy in the vehicle. The switches, which are classified up to ASIL D, insulate disruptions caused by short circuits, overvoltage or undervoltage, and energy source failures. If one energy source fails, it is also necessary to switch to a redundant energy source in order to maintain braking and steering, for example. Energy storage systems such as the SCAP module from Eberspaecher provide a highly efficient solution for this.

The electronics experts at Eberspaecher have so far already produced around 30 million semiconductor modules. They ensure safety and comfort while serving as a cornerstone in the area of autonomous driving.

The JH-BP2 tracking device is the first of its kind with rugged durability signaled by its IP69K Environmental Rating and a 17-year battery life.
Gauge
March 17, 2022
Follow Us