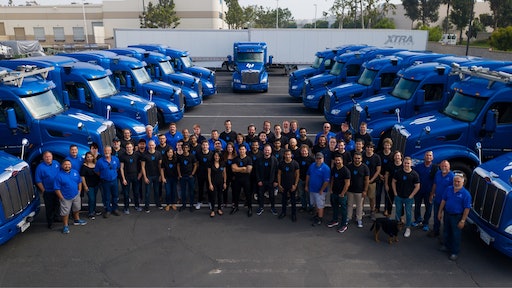 Embark Trucks, which has been developing self-driving trucks since the company started in 2016, announced it will go public. The move is a big step forward in the investment and development of autonomous trucks, long thought to be a potential solution to several trucking-related challenges, including the trucker shortage.

Embark, through its Partner Development Program, is working with shippers and carriers, including Anheuser-Busch InBev, HP Inc., Werner Enterprises, Mesilla Valley Transportation and Bison Transport, to help prepare their fleets to integrate self-driving technology and scale with Embark’s technology. Embark has a safety track-record with more than 1 million real world miles driven without a Department of Transportation-reportable incident.

“We have been solely focused on solving the problem of self-driving software for trucking since Embark’s CTO, Brandon Moak, and I founded the company in 2016,” Rodrigues says. “This singular and disciplined focus on the trucking market in the United States has allowed Embark to achieve many industry-first technology milestones, including the first self-driving truck to drive coast-to-coast, and positions Embark to be a leader in autonomous trucking software.

Rodrigues noted the company's milestones that have allowed it to move toward commercialization.

"The recent accomplishment of key technical milestones, including handling highway work zones on the fly, and the announcement of our Partner Development Program mark the start of Embark’s transition from research to commercialization," he says. "After many years of R&D on the world’s most mature self-driving truck software stack, we plan to enable carrier operation of self-driving trucks in the U.S. sunbelt beginning in 2024. Following the transaction with Northern Genesis we expect to have a war chest that fully funds this commercialization plan, and then some."

“The Northern Genesis team is enthused to partner with Embark as it continues to execute on its focused mission, a mission that began more than five years ago. Our respective teams share a conviction that success today demands alignment with the ongoing secular shifts towards sustainability and social responsibility;

The transaction reflects an implied pro forma equity value of $5.16 billion and enterprise value of $4.55 billion.

Upon closing, the combined company is expected to receive about $614 million of gross cash proceeds, comprised of roughly $414 million of cash held in the trust account of Northern Genesis 2, assuming no redemptions by NGAB stockholders, and a $200 million fully committed PIPE at $10 per share. The PIPE is supported by anchor investors including Canada Pension Plan Investment Board (CPP Investments), Knight-Swift Transportation, Mubadala Capital, Sequoia Capital, and Tiger Global Management, together with the Northern Genesis management team and its associated institutional investors.

The merger is expected to be complete in the second half of 2021, subject to U.S. Securities and Exchange Commission review and other regulatory approvals.

Embark also announced that former U.S. Secretary of Transportation Elaine L. Chao has been appointed to its board of directors.