This device is available in three different variants including six outputs, six inputs, or two inputs and 4 outputs. 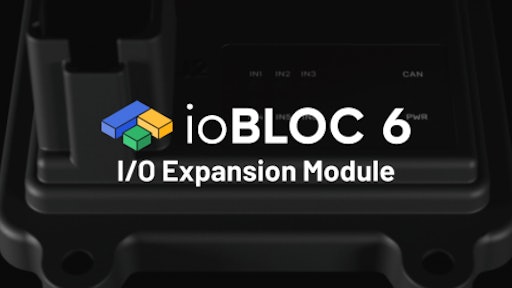 STW Technic announced the release of a new I/O hardware device – the ioBLOC 6 Expansion Module. These modules were designed with decentralization in mind. The need to connect more devices—easier and faster—is what drove the team at STW Technic to create this new design. It is available in three different variants including six outputs, six inputs, or two inputs and 4 outputs.

The ioBLOC 6 includes a set of six onboard LED indicators marked per input or output (depending on model variant). These indicators, when operating normally, remain solidly always lit. If the module detects an overcurrent or short-circuit fault, the LED indicator will flash indicating a need for diagnosis by machine technicians.

Some of the environmental protections in place for this module are:

Register
This webinar explains the technology behind DC contactor relays and the special concerns of 48-volt to 900-volt applications in commercial vehicles.
Littelfuse Inc.

This monitor provides visibility of contamination in hydraulic and diesel systems.
MP Filtri USA, Inc.
May 24, 2022
Follow Us