MAN and seven partners have initiated a project involving the design of a prototype safety vehicle capable of following rolling roadworks, with no driver required, to protect on-site personnel and other work vehicles. 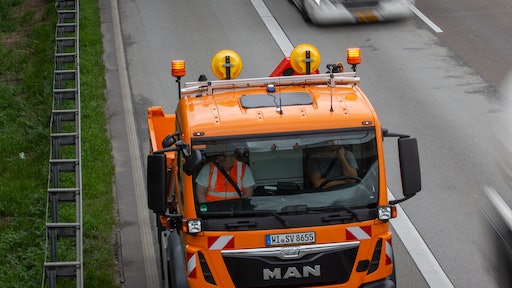 Around 44% of all accidents on Germany’s motorways involving trucks occur in the inside lane or on the hard-shoulder. Collisions with safety vehicles protecting the rear end of rolling roadworks are a regular feature of these incidents. Even though the distinctive orange-colored highway agency vehicles pull a trailer with a 4 m high illuminated hazard warning and lane closure sign, they are sometimes overlooked or noticed too late – sadly with often serious consequences.

This led MAN Truck & Bus and seven partners from the worlds of industry, scientific research and public administration to develop a ground-breaking mobile solution to this risk through the “aFAS” research project. Titled Rückendeckung (Backup), it eliminates the need for a human driver in hazardous situations. “aFAS” is an abbreviation for the German phrase meaning “automatic driverless safety vehicle for motorway roadworks.” As that description indicates, the project involves the design of a prototype safety vehicle capable of following rolling roadworks along the hard-shoulder of the motorway entirely automatically, with no driver required, protecting the on-site personnel and other works vehicles from the flowing traffic.

The four-year research project was launched back in 2014 and designed to run for 4 years, financed by funding of some €3.4 million in total from the German Federal Ministry for Economic Affairs and Energy. The project represented the first complete technical feasibility study for such a vehicle, as well as considering the extent to which current standards and legislation would have to be amended – plus, needless to say, the impact it would have on public roads in live operation.

MAN developed the automated safety vehicle in cooperation with other technical project partners, itself being responsible for driving functionality, wireless communications, the HMI (Human Machine Interface) and the complete vehicle specification.

The test vehicle was a MAN TGM 18.340, fitted out with cameras and radar systems to provide all-round visibility and sensing, as well as various assistance systems. The steering and braking systems, sensors and control software also had to meet the most stringent criteria. The prototype vehicle was largely built using mass production components, both for its regular control systems and in implementing functional safety aspects. An additional specially developed all-round sensor system featuring high levels of safety and an integrated, highly reliable object and lane detection system also enabled analysis of road and traffic situation data. The data communication between the working vehicle at the front and the safety vehicle at the rear was wireless, and displays were installed in both vehicles to indicate the operating state of the driverless prototype.

After the driver has activated all the systems and climbed out of the cab, the TGM steers, accelerates and brakes autonomously, following the vehicle ahead at a defined distance. In the event of a malfunction, it automatically comes to a stop. When passing by critical locations such as entry or exit slip-roads, the prototype can be brought to within a few meters of the lead vehicle and digitally “coupled” to it.

In the early years of the project, the system initially underwent trials on MAN test tracks, then in the second half of 2017 on closed stretches of roadworks on motorways in the state of Hesse, before the vehicle was returned to its developers in Munich. The MAN TGM prototype was further optimised based on the experience gained in this process, and has been running in a real-world pilot on motorways in Hesse since early April 2018.

The “aFAS” project was successfully completed in June. The findings from it will be incorporated into MAN’s future production development, and into further testing and research projects relating to automated and autonomous driving (such as platooning).