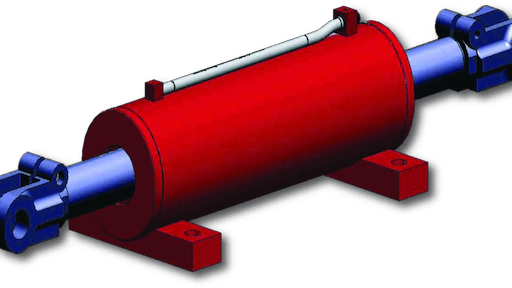 When Rota Engineering Ltd.—a linear transducer sensor manufacturer headquartered in Bury, Manchester, U.K.—polled U.S. cylinder manufacturers about five years ago, it found that many were being charged anywhere between two and five dollars per inch to gun drill a cylinder rod to embed a precision sensor. Customers with applications necessitating cylinders with 48 or 72 inch strokes were looking elsewhere for a more affordable technology.

Rota has been a part of the linear transducer industry for approximately 20 years, predominately in Europe and the U.S. in the oil and gas industry where cylinder size was not a significant factor. Mark Hoffman, sales manager for Rota’s Dallas, TX, location was tasked to help in the growth of the company’s North American mobile-based linear transducers.

With the high costs and time associated with deep drilling of cylinders to incorporate sensor technology, Rota Engineering thought, why not utilize the same Hall effect sensor technology while keeping the sensor outside of the cylinder?

There were issues that arose when dealing with a magnetic signal communicating through a ferrous material cylinder wall with the sensor outside.

The pneumatic cylinder industry has been utilizing the external configuration for years but generally deals with composite cylinder bodies due to the lower pressures compared to hydraulic cylinders. If not composites, stainless steel is used, and since the material is non-magnetic, the magnetic field is able to pass through the cylinder wall to communicate with the external sensor.

Rota’s patent pending technology features a linear transducer that can is mounted externally onto a standard carbon steel cylinder wall. The cylinder position is measured when a pre-fitted permanent embedded magnet in the piston is moved by hydraulic pressure. The externally mounted transducer allows equipment operators and maintenance personnel to access and replace the sensor if necessary, and needs no deep drilling costs.

The external configuration features a transducer accuracy of typically ±0.5 mm (0.02 in.). Cylinders can be supplied with magnets already fitted so if stroke sensing functionality is required, the transducer can be added at a later date. And, for safety critical applications that require redundancy, two transducers can be used.

When dealing with internal sensor imbedding, the material of the cylinder is irrelevant other than the material the magnet lives in. “We need to know if it is magnetic or non-magnetic material and we calibrate our sensors to understand roughly what field of strength they’re housed in,” explains Hoffman.

External mounting is more complicated. Depending on the tube producer’s manufacturing process, the structure of the tube can change making it difficult for the magnet to communicate through the material. “We’ll talk to cylinder manufacturers about the type of material and the process: whether it is cold drawn, has been stress relieved and other material production factors that can affect sensor performance,” says Hoffman.

Rota is continually trying to come up with solutions for each customer application. “If they come to us with an eight-inch stroke application, I’ll focus on internal sensor solutions since the cost of drilling is low,” says Hoffman. The external sensor option is suggested right around 30 inch stroke applications, but environmental factors and sensor protection are taken into consideration, as well. “It’s nice to have options for the customer depending on what they need it to do,” says Hoffman.

Working with the OEMs

Rota’s North American group works diligently with cylinder manufacturers making sure they understand how to integrate the sensors. The customer in return makes sure the right electrical output is received and the performance and package stand up to the application’s environment.

While an external sensor seems out of the question for rugged off-road applications where debris could damage such a fragile component, Rota does have OEMs using the external sensor solution in high vibration situations. “We have agriculture applications on machines that are running at high speeds bouncing through fields,” explains Hoffman.

Great Plains Manufacturing Inc., Salinas, KS, uses smart cylinders on its three point hitch planters’ support caster wheels on the back of the machine. Before the smart cylinders were used, farmers were having problems with the wheels tearing up the field during reverse mode. By placing the cylinder equipped with Rota’s external sensor on the back, the support wheels were able to be steered to avoid field damage.

“Great Plains took our sensor and put it on a dummy cylinder bolted onto the tractor. Whenever the front wheels of a tractor turn, the sensor at the front tells the cylinder mounted on the back with the caster wheels to turn at the inverse angle,” Hoffman says. “The whole system backs up beautifully.”

A refuse truck application using the external sensor mounted configuration had the cylinder manufacturer place an angled piece of iron over the sensor to protect it from garbage being dropped on it. “Our company doesn’t just make and ship sensors. We are an engineering company first,” says Hoffman. There are ways to make an external configuration work for rugged environments, and Rota can help with the design, integration and implementation issues along the way.

Back in 2009, MTS Sensors, a division of MTS Systems, Cary, NC, announced the development of a partnership program between MTS and several cylinder manufacturers. The MTS Integration PARTNER Program combines the position sensing technology of MTS Sensors with hydraulic cylinder manufacturers to enable economical and performance-optimized smart cylinder design.

“We realized that the best way to meet the OEM’s needs for a rugged, reliable and affordable embedded sensor was to partner with key cylinder manufacturers that share the same values of customer focus, application knowledge and problem solving that MTS has built its reputation on,” noted an MTS Sensors technical sales manager in the 2009 PARTNER Program announcement.

“The program was started for MTS Sensors to be able to gain insight into the installation of our sensors into the hydraulic cylinders, and to discover what the issues were for cylinder manufacturers to integrate the sensors,” says Haubold “Hub” vom Berg, technical marketing manager for MTS Sensors.

MTS began conversations with approximately 60 cylinder manufacturers prior to the program launch to determine the needs and benefits of the program to the manufacturer. One of the biggest benefits for program members is competitive pricing on the magnetostrictive position sensor and magnet components provided by MTS.

Design support is available for the cylinder manufacturer for sensor integration of an existing cylinder, or during development of a unique cylinder to optimize the product and its installation, helping to keep production costs lower.

“In most cases a company will take an existing design of a machine and retrofit electronic controls, meaning the smart cylinder will be of equal length and dimensions as before,” says vom Berg. “In some cases there isn’t enough room for our sensor to fit into the existing cylinder footprint.” The cable that is connected to the sensor’s bend radius is at times too low, which can cause eventual wear and part failure. MTS resolved this problem by replacing the cable with single wires that feature a tighter bend radius to integrate the sensor into an existing design easier.

MTS actually manufactures its own metals for sensor manufacturing, a secret material to the industry. “The materials we use have a certain process that has not been able to be duplicated for the duration of the 25 year patent we’ve had,” vom Berg says.

General Engineering Company, Abingdon, VA, has been in the custom engineering and hydraulic cylinder manufacturing business since the 1940s. The newest company to join MTS’ PARTNER program, the news was announced in March in conjunction with CONEXPO 2011 in Las Vegas.

John Owens, president of General Engineering, confirms that the change to smart cylinders is a process that takes time adjust to. “It took us about 90 days to adjust our manufacturing process, however we were already doing sensor integration work with other sensor manufacturers prior to joining the MTS PARTNER program,” he says.

“The MTS process is a little more simple as far as the machining necessary to incorporate and install the sensor into the cylinder.”

Owens says the major advantage to the program is being able to work hand in hand with the customer. Since a smart cylinder utilizes two areas of functionality (hydraulic and electronic), the program allows experts from both sides of the product development to work together to facilitate a quicker development process. “The integration and development process is much smoother,” says Owens.

And, while an upfront advantage to the program is reduced sensor prices from MTS, Owens explains that it is really a “down-the-road program” that offers the chance for new business and opportunities as supplied by MTS when OEMs come to them for a smart cylinder solution.

“The program has helped us to become a more beneficial cylinder manufacturer because we are able to offer the MTS sensors as part of a package program with the backing of MTS,” he says.

In the past, the customer would present its smart cylinder request to a cylinder manufacturer and would pick a sensor to have incorporated into the design. The MTS PARTNER program allows a cylinder manufacturer to be on the front end of development and be able to offer a complete, optimized product with as much as 50% reduction in implementation time.

To simplify or not to simplify, that is the question