To simplify or not to simplify, that is the question

For certain applications, an OEM may find it more practical to invest in advanced sensor technology combining several features into one end product. 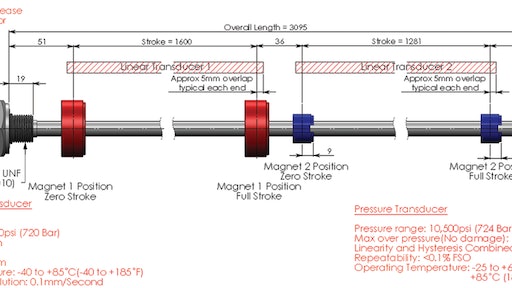 While oftentimes simplification is the goal for system and equipment manufacturers, there are certain applications where a more costly upfront investment for customized sensor technology makes sense. Rota Engineering, Manchester, UK, specializes in the design and manufacture of position transducers and ex connector systems, as well as offers engineering solutions for customized multi-parameter sensors with combinations of position, pressure, velocity and temperature measuring capabilities.

The market for multi-parameter sensors is small, and Mark Hoffman, Sales Manager for Rota Engineering Ltd.'s Dallas, TX location, doesn't see it growing significantly anytime soon. "Because our products cross into so many industries, we compete with the mass sensor producers, but there will always be applications that require so much additional engineering that few companies will take the time to compete on that level, especially if they generally deal with large off-the-shelf bulk orders." Rota does offer standard product lines as well to fulfill standard sensor needs, but also uses them as the base foundation for the beginning design stage for a client's specialized design.

When asked what the company's limitations are for its customized sensors, Hoffman comments, "We can do anything as long as we aren't breaking the laws of physics and you're willing to pay for it. If a customer is spending millions of dollars on a piece of equipment, what's a little more to gain so much insight and system functionality?"

Doubling a sensor's abilities within the same space footprint isn't always a concern considering the comparable cost of a sensor to the magnitude of larger equipment. But, there are instances, such as a customer who manufactures deep-sea valve actuators, on which any intrusion can be a source of catastrophic failure due to the massive pressure it is subjected to thousands of feet under the ocean's surface. In such a case, Rota will work with the manufacturer to integrate several sensors into one unit. In the instance of the valve actuators, position and pressure measurements ensure the system is performing accurately and safely. "The position of the piston on a valve actuator indicates the position of the valve during an emergency shut-down scenario, if there has been a leak in the gas or oil pipeline. And, if the valve actuator was to be over-pressured in a certain area of the system, that can cause leaking, so pressure needs to be monitored as well."

Drilling equipment in quarries benefits from using a combination of position and velocity sensing to monitor not only the location of where the cylinder is in the earth, but at what speed the drill is rotating dependent on the type of ground material through which it is passing. "The velocity information lets the operator know if they've hit hard rock or soft rock so he knows whether to change the rate of drilling so as not to damage the drill bit," Hoffman explains.

"Position and temperature is a unique combination, but we have a particular application with an underground mining truck manufacturer who wanted to know the fluid level in a hydraulic reservoir, but also the temperature of the fluid." The intrinsically safe sensor package stands vertical in the hydraulic reservoir with float material around a magnet which goes up and down dependent on the fluid level which is converted into gallons. Underground mining equipment in particular can benefit from liquid level indicators because of the severely dirty environment they work within, especially in a coal mine. "Nobody knows if a hydraulic system is slowly leaking because the fluid gets absorbed into the coal dust. Temperature is an indicator if it's a fast leak and the hydraulic fluid is reaching a maximum operating temperature," Hoffman says.

A skid steer manufacturer approached Rota to investigate three-parameter sensors to measure temperature, position and pressure in one system. "They wanted to measure position to test fuel savings by automating certain functionality of the cylinder as they return to dig, for example," Hoffman says. "But, they also want to measure the pressure and temperature of the hydraulic cylinders because of how hot they can get when the machines are working hard. Cylinder seals are only rated to a certain temperature and pressure, so if an equipment manufacturer is designing a new piece of equipment, testing the cylinders for maximum temperature and pressure will tell them what parts of the cylinder, like the seals, need to be rated higher so they don't prematurely fail in the field."

The same goes for pressure sensing. Heavy-duty equipment manufacturers use pressure sensors in their hydraulic cylinders because of how the operators drive the equipment. "The operators were ramming big piles of rock and destroying the cylinders because of the pressure shocks the system was withstanding," Hoffman says. A multi-parameter sensor has a place in the equipment testing space where OEMs can see measurable results as to unpredicted forces and pressures acting upon the machine's systems and manipulate the design accordingly.

There are cases on construction equipment where adding a sensor such as temperature—which wouldn't have its own industrial packaging to mount to the machine—makes sense to try and incorporate into an existing linear sensor that's already designed into the system.

"I don't see many people putting multi-parameter sensors on off-road equipment beyond the test market, but there are distinct advantages to reducing the amount of wiring coming off of a system," Hoffman continues. Rota has provided wireless sensing options for that very reason, especially on moving parts such as an excavator boom where wiring can get snagged, pulled or damaged. The technology is still in the beginning phase, as Hoffman says wireless sensors can be affected by radio communication systems used in the field such as walkie-talkies. "We can talk about more automation, but there needs to be verified safety measures built into the sensors," he says. Other OEM customers integrate the sensors inside the cylinders to log occurrences for warranty claims.

As additional sensor functions are added to a position sensor, the sensor manufacturer must know what kind of parameters the customer wants in terms of performance. "There are a lot of variables to consider when you start adding multiple functions into one sensor package. For example, a lot of people forget that we have to have a different connector or cable to support analog information output."

There are also space constraints to consider. Sometimes a sensor can simply be attached to the existing PC board, but in other cases a sensor's pre-existing housing must be considered with connections and rerouted wiring. "It depends on what our engineering staff can do in the time frame the customer has. Sometimes we can make them very elegant and other times the time frame doesn't permit extensive engineering," explains Hoffman.

During the sensor design and manufacturing process, Rota is involved in nearly every step including aiding in system integration into the cylinder. "We have a lot of mechanical packages to offer, so we sit down with engineers to establish what environmental conditions the mechanical package needs to work in so as not to disrupt the sensor's functionality and performance," Hoffman says.

Multi-parameter sensors are a highly engineered technology for a small percentage of manufacturers, but the capabilities of an advanced custom sensor manufacturer like Rota can create a sensor or a combination of sensors for the harshest of environments. For explosive environments like in the oil and gas industry, a sensor can be manufactured to be intrinsically safe, meaning that the sensor will not create an ignition point in the event of a short or other electrical error. "Explosion-proof sensors are different. Those are housed in a thick metal housing that is specified to parameters determined by agencies like the UL/FM/CSA to ensure a spark can't access the outside environment. Since our sensors typically go into a hydraulic cylinder, we don't want to add a bulky housing, so we make our electronics intrinsically safe by using low power circuitry so any event of failure does not have enough heat or spark to cause an explosion," says Hoffman.

There are equipment manufacturers who currently use intrinsically safe-rated sensors on its equipment simply to ensure the equipment is as safe as possible for the operator, even in low potential explosive environments like in the tunnel boring industry. In the end, it comes down to whether the investment in custom or advanced sensor technology is worth the additional data, automated system control opportunities and operator safety features that can be achieved with multi-parameter sensor technology.

A technology's reach expands, both figuratively and literally

The ADR Battery Disconnect Switch connects and disconnects the electric circuit to and from the battery.
Littelfuse Inc.
May 8, 2021
Follow Us