A materials company develops a sensor which can accurately read NOx and ammonia levels, even in the presence of oxygen. 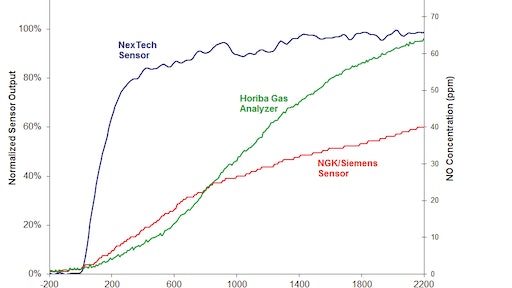 This chart illustrates how quickly the NexTech sensor can detect NOx compared to other similar sensors on the market.

As emissions regulations for diesel-fueled vehicles continue to become more stringent, it’s important for engineers to design a vehicle which will release fewer pollutants into the atmosphere. In the heavy-duty off-road industry, this has been done through the use of systems such as selective catalytic reduction (SCR) technology. But, how can it be assured that the SCR system will continue to work properly in the field and meet emissions requirements?

Fujio Hayashi, Director of Business Development at NexTech Materials, Lewis Center, OH, says nitrogen oxides (NOx) are basically what cause pollutants such as smog, so to be able to detect the amount of NOx being released at a given time is important.

The NexTech Materials NOx sensor is a part of the SCR system and monitors the levels of NOx being released into the air.

If too much NOx is detected, the sensor feeds the information to the SCR system which will adjust itself accordingly to continue to meet emissions regulations. “A NOx sensor is a critical piece of the entire system to make sure the truck and the diesel engine are meeting regulations,” says Hayashi.

NexTech is a materials company which develops its products from scratch, basically from a powder. Sensors are one of the many products the company designs; through its NTM Sensors division the company has a commercially available hydrogen sensor. Hayashi says NexTech began hearing from customers that there was a limited amount of commercially available NOx sensors on the market, and the ones that were available had some shortfalls.

Using its knowledge of materials and sensors, NexTech went about developing its own NOx sensor which would overcome the issues found with other NOx sensors, such as being able to detect NOx in the presence of oxygen.

How the sensor works

NexTech’s sensor detects NOx using an electro-catalytic mechanism. Hayashi says this is done with a working electrode which has a material that reacts with NOx. A voltage is then sent through an electrolyte to determine how much NOx is present in the system. The more NOx there is, the stronger the voltage will be.

Many NOx sensors work by first removing oxygen and then breaking down the nitrogen oxides to provide a reading. However, the NexTech sensor eliminates the need to remove oxygen; the sensor material is engineered to have a strong NOx sensitivity even in the presence of oxygen. While other NOx sensors have only been shown to be accurate to +/-10 ppm (parts per million), “we can get a reading that is accurate to +/-5 ppm,” says Hayashi.

The SCR system adjusts itself by releasing more or less urea based on information provided by the sensor. Urea, composed of ammonia, is injected into exhaust gas to interact with NOx, converting it into harmless nitrogen and oxygen. Hayashi says if the sensor detects too much NOx in the tailpipe, it will tell the SCR system to inject more urea, usually via the vehicle’s computer.

Along with its ability to work in the presence of oxygen, NexTech’s sensor can read ammonia as well as NOx levels. Hayashi says manipulation of the NexTech sensor’s operating conditions allows the sensor to measure NOx and ammonia separately, or just NOx, even in the presence of ammonia. Other sensors on the market are unable to distinguish between NOx and ammonia, providing an inaccurate reading of the NOx levels.

If too much ammonia is used, it will start being released as an output of the SCR. This ammonia slip can be harmful for the environment, which is why NexTech designed its sensor to report both ammonia and NOx levels. When the sensor detects too much ammonia, it will tell the SCR system to inject less urea. “[The sensor] helps tune the urea injection to the optimum reaction conditions, minimizing both NOx and ammonia emissions,” says Hayashi.

After several years of research and development, NexTech came up with its current design. Now the company is looking to find a partner to help bring the sensor to market. Hayashi says while NexTech has the ability to develop the sensor element, the packaging which goes around the sensor to keep it protected from outside elements is not within the company’s expertise. Once the issue of packaging is resolved, Hayashi says development should be finalized and the sensor will be available.

Data collection and machine connectivity starts with smarter sensors which not only provide information for the original intent but also other parameters.
July 30, 2020

The company will collaborate with Ainstein AI to create the sensors which will help enable autonomous vehicle operation.
Doosan Bobcat North America
June 11, 2020