Trucks of the Future

Creating a safer, easier work environment through increased connectivity and vehicle automation are the key design criteria for truck manufacturers over the next decade. 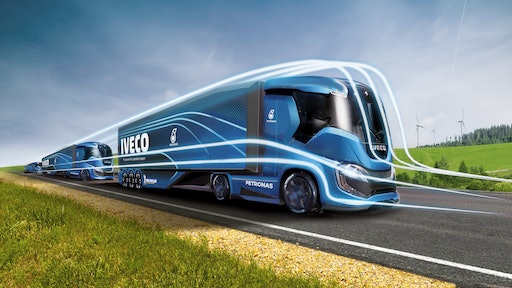 Every 2 years, the IAA Commercial Vehicle show highlights the latest technologies and vehicle concepts for heavy-duty on-highway applications. At the 2016 edition, many companies chose to demonstrate their predictions for what the future of trucking will look like by displaying concept vehicles.

Connectivity, automated systems, and improvements in fuel efficiency and emissions output were among the key traits these “trucks of the future” possessed. For instance, the IVECO Z TRUCK concept vehicle featured a more aerodynamic design, the ability to run on bio-LNG and a waste heat recovery system to reduce emissions to nearly zero. Automated driving systems on the Z TRUCK are used to demonstrate technologies capable of improving safety and the transition towards more autonomous driving.

Bosch’s VisionX concept vehicle included the vast amount of driver assistance systems the company foresees being integrated into future truck models. These systems will combine with automation and Internet of Things (IoT) capabilities to make the driving experience safer and easier.

The vehicle came about as a demonstration of the technologies the company laid out in its VisionX study which overviews how it sees the trucking industry progressing over the next 10 years. It looks at how connectivity, modern display and control instruments, as well as sensor technology and electrically supported steering systems will provide a more intelligent means of cargo transport, route management and eventually automated driving.

According to Johannes-Joerg Rueger, head of Bosch’s Commercial Vehicle and Off-Road Unit (CVO), Bosch is extremely strong in automation for the passenger vehicle market with products such as radar, video and ultrasonic technologies that will be needed to continue advancing driver assistance systems. “We believe now for connectivity, driver assistance, as well as powertrain electrification for commercial vehicle and off-road applications it’s exactly the right point in time [to enter the market],” he says. “Business volume in terms of driver assistance systems, as well as connectivity products and services will increase dramatically in the next couple of years.”

Because of this, in early 2016 Bosch established a new business unit to bring more of its technology expertise to the commercial vehicle market. Finding the right time to enter a market is a delicate balance, Rueger notes. “If you enter too early then you put a lot of money into pre-development studies with no real volume. If you enter too late then competition has captured all the market and business.”

The Bosch VisionX concept truck included various connectivity and automated systems Bosch currently offers or believes are on the horizon. While the VisionX truck is not meant to be an operational vehicle that will be tested in real-world scenarios, many of the technologies are either already in use or being tested on actual vehicles. “It was a demonstration object to put our vision and a combination of different technologies on display, and show to our customers and the public,” says Rueger. In essence, it’s a simulation of what future truck models could look like.

Among those future innovations is an enhanced operator experience through the reorganization and simplification of human machine interface (HMI) components. In its VisionX study, Bosch notes the large number of switches, levers and displays within the operator cab which can increase the risk of distraction and mistakes. The goal for future truck cabs is to make HMI as easy to use as today’s smartphones.

One of the ways it will go about this is to have clear, hierarchical control structures and displays adapted for specific driving conditions, such as convoying. In addition, Bosch foresees enhanced displays and camera systems which can monitor traffic around the truck, replacing rear-view mirrors and minimizing a driver’s blind spots. Read the article “Mirrorless Vehicles are Closer Than They Appear” to learn more about Bosch and other companies’ current camera systems which aim to replace truck mirrors.

Rueger says much of the technologies demonstrated in the concept vehicle revolve around changes coming to the driver workplace. “It’s all about different systems around driver assistance, connectivity and services which make the life of the trucker easier and the whole process more efficient,” he says.

Increased connectivity and the implementation of concepts such as platooning will change the truck driver’s workplace dramatically. Truckers will no longer be just a driver, but will be capable of doing many of the things that are now currently done at a fleet office such as having the ability to send and receive documents and track cargo. Better predictive maintenance will help reduce downtime further by alerting drivers of the need to replace parts sooner or even while en route to a delivery or pickup.

Platooning—two or more trucks wirelessly connected in a convoy—will take advantage of automated driving capabilities and provide another means of easing the driving experience. All trucks in the convoy accelerate, brake and steer at the same time, lead by the first vehicle. Increased fuel economoy is possible with platooning, as well, due to the vehicles following one another at a closer distance and thus getting the benefits of slipstreaming. Currently, it’s estimated fuel consumption can be reduced by up to 10%. Learn more about truck platooning in the article “Follow the Leader.”

Efficiency and reduced emissions output will continue to play an important part in the way trucks will be designed in the future. The VisionX vehicle featured a diesel engine combined with an electric motor that reduces fuel consumption in specific driving conditions. Additionally, inclusion of the electric motor electrifies auxiliary systems to improve fuel economy even further.

In the future, more cities are anticipated to have stricter emissions regulations, requiring the use of electric drive capabilities to minimize emissions output. Enabling vehicle operation by either an efficient diesel engine or an electric motor would allow a truck to do both highway and inner-city driving.

Rueger says that at some point in time, smaller inner-city delivery trucks will most likely go the pure electric route. While there are some on the roadways today, the cost of an electric drive system compared to diesel engines are still high. However, if in the next few years there is a significant cost reduction, particularly for batteries, then electric drive trucks, especially for inner-city driving, could become more prevalent, providing fleets with a better total cost of ownership incentive. “We believe there will be a co-existence of both,” says Rueger, “For long-haul trucks, diesel engines will still be first choice for the foreseeable future.”

The future is closer than ever

Bosch’s goal when developing the VisionX concept was to demonstrate what will be capable within the next 10 years. While there is no set timeframe for when the technologies will become industry standards, early iterations of many are already being used in today’s trucks. Driver assistance systems which warn of a lane departure or perform emergency braking, for instance, are currently in use, and in Europe are required by legislation to be integrated on all new truck models.

As the benefits of these systems becomes more apparent, their development will continue and there will be a greater likelihood of more advanced iterations being available in the not-to-distant future.

Much of the technology and componentry needed to bring these future technologies into existence are currently available. “It’s not that we’re talking about something which is totally undeveloped, and not yet clear whether it can be achieved,” says Rueger. Instead, it has to do with cost, testing and validation, and in some instances regulations. Platooning, for example, involves the trucks following one another at a distance of 10-15 m (32.8-49.2 ft.) which is not currently allowed at maximum speed.

Because it takes time to develop and validate the technologies of the future—and get the industry and regulators on board with some of them—a step-wise approach will be taken to rolling out many of them. Lane departure warning systems as they exist today send an alert to the driver so corrective action can be taken. Rueger says the next step in the system’s development process, though, would be the implementation of automated steering capabilities which keep the vehicle in its lane.

“The big truck companies and OEMs are preparing for the various technologies in the timeframe of 10 years from now because the technologies will need to be validated step-by-step,” Rueger concludes. “That takes some time.”