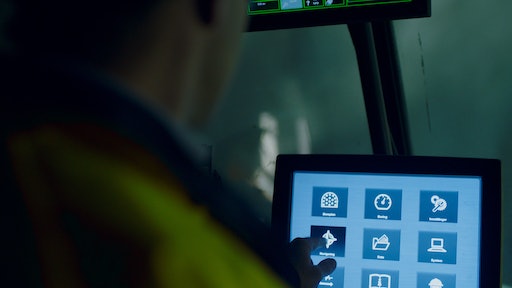 Improved production at a lower cost

“Today, in tunneling projects, especially large ones in urban areas, there are differences in the cross section. You go up and down with your drill plans,” says Johan Jonsson, Product Manager Boomer, Atlas Copco. “The Dynamic tunneling package helps you so you don't have to go up and down anymore. The drill plan is made on the drill rig and at the face.”

Atlas Copco’s customer Veidekke and their RV80 project in Bodø, Norway, was one of the pilot projects for Dynamic tunneling package.

“Veidekke is working on the State highway 80 project in Bodø. There's a tunnel that's two times 2.5 km where we are going to excavate about 500,000 cu. m of rock,” says Jon-André Nilsen, Manager Surveying Technic Underground, Veidekke.

Today, all tunneling models exist in a 3D model. Previously the model was imported into Underground manager (an Atlas Copco software used for planning and reporting of drill rig data and information) and then all the drill plans would be done manually in Underground manager. With Dynamic tunneling package customers still import the 3D model but only need to set up a set of rules (a rules file) in Underground manager. The set of rules and the 3D model is then brought to the drill rig by USB or WiFi-connection. The drill rig will then makes its own drill plans based on where in the tunnel it is navigated and according to the tunnel model. Due to this, the drill plans will always be precisely made for the section and size that should be excavated.

Dynamic tunneling package is an automation offer for face drilling rigs within Powered by Automation.

It’s not always in the one big thing, but in the many little things. Atlas Copco's little thing is called “Powered by Automation.” This means that it is not only talking fully autonomous products, but different steps of automation based on the task at hand and on the current level of automation in a mining or construction operation. The Powered by Automation concept contains four steps – from data monitoring and product function control, to calculated optimization and in the end full autonomy. When these steps are applied to various parts of a customer's operation, the little thing becomes part of something greater.

And that is kind of a big deal.