A behind the scenes look at Volvo’s on-board weighing system set to launch at INTERMAT 2012 in Paris, France. 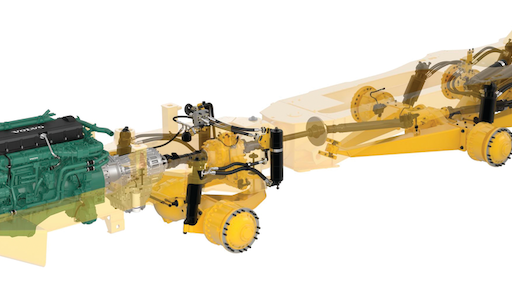 Engineers work every day to take the human element of error out of the equation to create the most efficient machine possible. Optimal productivity means the least amount of cost and time, and wear and tear on the equipment with the most work possible accomplished every second of every minute of machine uptime.

However, the human element of machine operation remains, and Volvo has combined the importance of operator knowledge with a fully automatic advanced weighing system to maximize productivity on a job site. The Volvo on-board weighing (OBW) system combines an active hydraulic suspension system equipped with pressure sensors on the cylinders, with a dedicated electronic system to manage the suspension in real time. The load weighing software is fully integrated into the vehicle’s existing electronic system.

“We can take the data off of the equipment in real time through Volvo’s  CareTrack telematic system to the site manager so he can monitor a machine’s hours and cycles together with the transport load during a period of time,” explains Assar Martinsson, Product Manager of Volvo’s Articulated Hauler Platform.  “We’re talking about productivity and we’re talking about cost per ton. It’s not always the best choice to overload the equipment and run with too much load, because you add stress and component wear, especially on the tires. And, you’re using more fuel, so you can use the data to train operators to get the most out of the equipment.”

The system logs all transported loads and allows complete payload management, giving access to data such as total transported load in tons, tons transported per liter of fuel and total number of vehicle cycles. The OBW system also offers the ability to monitor previously unattainable information like the weight of the carry-back load after the haul truck unloads.

The information gathered is displayed both on the operator’s display, as well as to the operator of the loader vehicle via an externally mounted indicator light. A green, yellow and red light system is used to show the load information: the yellow light is lit when at part load and changes to green when the nominal load has been reached. The red light comes on if the truck has been overloaded.

The operator monitor displays both the load indicator light and actual payload. The graphical depiction of load changes during loading to symbolize the increase in the actual load on the machine. Cycle information can also be displayed, such as number of cycles and total transported load.

“The more we learn about how our customers are using our machines, the better we can build the next generation of equipment,” says Anita Sköldberg, Director of Volvo’s Articulated Hauler Platform. “We saw the on-board weighing system as a big benefit for the customer to be able to follow and monitor the productivity of their Volvo vehicles.”

The CareTrack system was designed to work with the electronic control system to optimize productivity and increase machine utilization. CareTrack uses a mobile network or satellite technology to send information securely and instantly to any remote online connection.

The goal of the system is to identify machine issues sooner and resolve them faster, and is accomplished through fault-reporting, activity warnings and facilitating remote diagnostics. Machine operation and deployment can be optimized via functions that monitor fuel consumption, location, hours of operation, speed, approaching service intervals and now load.

The OBW system is available only on Volvo’s 35- and 40-ton full suspension F-Series articulated haulers. Volvo launched its full suspension machines in 2008, and the F-Series in 2011. The soon-to-be-launched on-board weighing system is yet another advancement to further operator comfort and productivity.

The active hydraulic suspension is on all wheels, features automatic control and adjustment of the stability of the machine, and offers a 30% reduction of driver vibration.

The Volvo OBW system was announced as a Gold Winner for the INTERMAT 2012 Innovation Awards on January 13. The system, as well as several other Volvo vehicles and system will be on display at the company’s booth, 6 C 041.

The company’s booth is themed ‘Discover A New Way’ and will showcase 12 new machines. The stand will feature technologies ranging from advanced engineering solutions to mobile high-tech diagnostics to allow customers to accurately calculate their costs.

Daimler and Torc Robotics are expanding testing of their SAE Level 4 automated truck technology to new public routes in the U.S. in order to collect data from real-world traffic scenarios.
Daimler AG
February 19, 2020

Truck platooning continues to be an area of development for some commercial vehicle OEMs who believe there is still opportunity for the technology to advance and become more widespread in some markets.
Gigi Wood
February 18, 2020
Follow Us