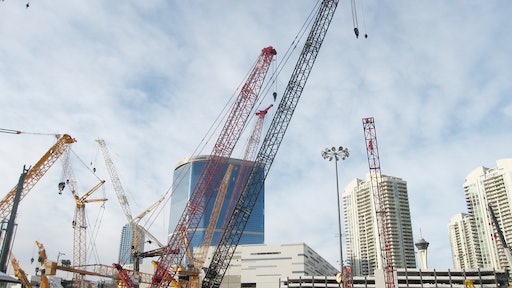 New from Manitowoc are two ground-breaking crawler cranes, both making their debut at CONEXPO 2014 in Las Vegas, NV. The 300 t (330 USt) MLC300 and the 650 t (716 USt) MLC650 are loaded with an array of innovative features, most notably their unique Variable Position Counterweight (VPC).

“The VPC is game-changing technology,” says John Kennedy, SVP Crawler Cranes. “This new technology will have a significant impact on the lifting industry, as it enhances crane capacities, reduces mobilization time on the job site, and in the end, saves customers a significant amount of time and money.”

Both cranes are ideal for energy-related projects, including refineries, petrochemical installations, and power plants, as well as infrastructure applications. The smaller footprint plus the Variable Position Counterweight system enable the cranes to easily move around a job site, and a VPC-MAX capacity enhancing attachment allows increased capacity for heavy lifts that would usually require a wheeled-type lift enhancer.

For the MLC300, the VPC-MAX attachment increases the max load moment when a 30 m (100 ft) fixed mast, a VPC-MAX counterweight beam and an additional 40,000 kg (88,185 lb) of counterweight is added to the base crane. The ground preparation area needed for the MLC300 using the VPC-MAX can be only one-tenth of that required by competitive cranes.

Because the counterweight attachment of the VPC-MAX on the MLC300 and the MLC650 never touches the ground, higher capacity lifts on barges that customers were never able to perform before are now possible. In addition, with its long reach and high capacity, the MLC650 can install 120 m (394 ft) and taller towers for the wind industry.

Both the MLC300 and MLC650 are designed to be easily transported anywhere in the world with their optimized component weights and dimensions. They have a removable live mast shipping module and their boom inserts are designed to allow luffing jib inserts to ship within them, which reduces shipping costs. In addition, both cranes use Manitowoc’s patented FACT connection technology and are operated via Manitowoc’s Crane Control System (CCS), a standard operating system across several crane models in different product ranges.

“For both the MLC300 and the MLC650, we interviewed customers around the world,” says Kennedy. “The result is two innovative cranes that are geared toward their needs. Customers will be able to lift heavier loads to higher reaches, reduce the time spent preparing the site for lifts, and ultimately, save money. The VPC’s breakthrough technology will help customers become more dynamic and nimble on the job than once thought possible.”