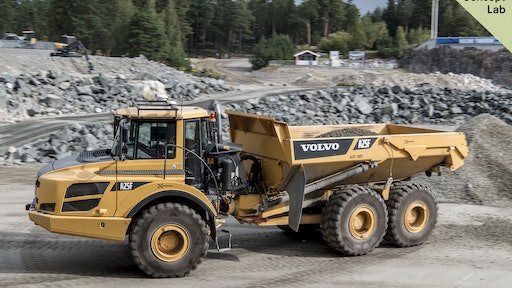 An exclusive demo of Volvo Construction Equipment’s (Volvo CE) prototype autonomous wheel loader and articulated hauler working together impressed the crowds at the company’s Xploration Forum, held September 9-14 in Eskilstuna, Sweden. The prototype wheel loader filled the prototype articulated hauler – before dumping its load and repeating the cycle. In a one-hour comparison it was found that the autonomous wheel loader could reach the equivalent of 70% of that of a skilled operator’s productivity levels when loading and unloading. This is not just theoretical, the machine has also done 'real work' for a Volvo CE customer at an asphalt plant in Sweden.

“The demonstration machines were programmed to work together and carry out a specific set of actions on a pre-defined route,” explains Jenny Elfsberg, Director of Emerging Technologies at Volvo CE. “The machines can perform the same task over and over again, along a fixed route, for a relatively long period of time. But it’s still early days for this technology, we are working on developing solutions that have the required safety and performance levels that the market will accept.

“There is still a long way to go so there are no plans for industrialization at this stage,” she continues. “Currently these prototype machines don’t communicate with each other and machine-to-machine communication technology – where machines ‘talk’ to one another and to a central control point – is crucial when it comes to avoiding collisions and facilitating an efficient flow of equipment.”

Looking to the future

The demonstrator machines that were unveiled to customers, members of the international press, government representatives and academics at the Xploration Forum are standard Volvo products – an L120 wheel loader and an A25F articulated hauler – which have been upgraded with autonomous technology. Once a solution is finalized, this technology could be applied to other products in Volvo CE’s range.

“Autonomous machines will increase safety in hazardous working environments and eliminate the possibility of accidents caused by human error,” says Elfsberg. “They will also perform repetitive tasks more efficiently and precisely than a human operator and, because machines will be operated in the most efficient way, customers will benefit from improved performance, productivity, fuel efficiency and durability. In the future you could also potentially have one operator for three or four machines, increasing productivity and further decreasing costs. Looking ahead, I imagine that autonomous machines will be smaller and more robust. There will be no need for a cab or suspension – much like the HX1 concept which Volvo CE unveiled as part of its electric site research project at the Xploration Forum (see separate press release).”

Volvo CE has been working on autonomous machine research for more than a decade. Its focus on futuristic technology such as autonomous machines is fueling the development of mid-term innovations at the company. Technology such as semi-automated or automated functions will support more immediate developments years before it’s possible to realize the ultimate goal. There are already cases of automated and assist-functionalities on the market today. For example, earlier this year Volvo CE launched Volvo Co-Pilot, a system that offers a range of intelligent machine services – Load Assist, Dig Assist, Compact Assist and Pave Assist – to help operators deliver higher quality outcomes, in less time and with less effort.

“We are starting to see systems that are less dependent on operator skills, ones that support operators with guidance or control primary functions,” says Elfsberg. “In the future we will see increased machine autonomy and the operator will act more in a supervisory capacity. This will provide less stressful, more interesting work for operators, with perhaps several machines being controlled remotely by one operator. Of course some tasks are so complicated that you really need to feel what you’re doing, and in those cases we will still need operators controlling the machines from inside the cab.”

A Connectivity and Technology Revolution is Underway