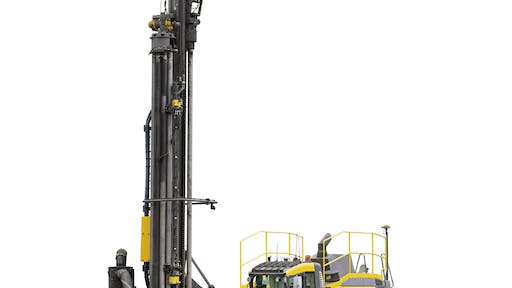 SmartROC D65, the world-class drill rig for open pit mines from Atlas Copco, was on show when the company welcomed visitors to its booth at MINExpo 2016.

Not only is this rig an international forerunner in automated drilling technology, it has recently been upgraded with a fuel savings kit that cuts an already low fuel consumption by a further 15%.

Another new addition is that the rig comes with optional long and standard feeds, making it suitable for the widest range of drilling applications.

Designed for hole diameters of 4-5/16 to 8 in. (110–203 mm), the SmartROC D65 epitomizes the future of open pit mining with a combination of power and intelligence that makes drilling blast holes as well as pre-split and buffer holes easy and precise.

For example, its Hole Navigation System (HNS) permits a faster setup and eliminates the need to manually mark and survey hole positions. The rig then proceeds to drill the hole to the desired depth by itself, adding and extracting rods automatically.

Moreover, the rig can be operated by remote control using Atlas Copco’s new BenchREMOTE station that allows the operator to run the rig at a safe distance whenever bench stability is in doubt.

The rig’s easy-to-use ROC Manager and Surface Manager software also enables log files to be compiled, analyzed and consolidated with data from multiple drill rigs in the same fleet. It can also share this intelligence with all other rigs in the SmartROC family as well as with drills in the Atlas Copco Pit Viper series.

On top of this, the SmartROC D65 embodies the future of surface mining in terms of operator comfort. The noise is minimal, the air temperature is pleasant, and the color display screen is easy and clear to see.

Mattias Hjerpe, Product Manager at Atlas Copco, says, “Our theme at MINExpo will be ‘The Future of Mining is Now,’ and in that sense, the SmartROC D65 is a perfect example. It shows how we are contributing to the future by using the latest available technology today to increase efficiency and lower the total cost of operations. We think it represents all that is good about how surface drilling should be done in the 21st century.”