At CONEXPO 2020, Topcon will showcase its SmoothRide and Pavelink systems which help to create smoother paved surfaces. 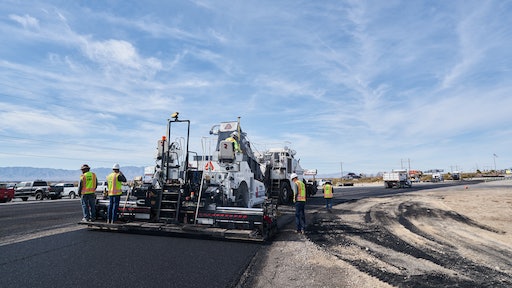 Topcon Positioning Group will have a focus on intelligent paving during CONEXPO 2020. As such, the company will highlight its SmoothRide system which includes scanning an existing surface, converting the data into 3D model designs used to create machine control files for the machine milling, paving and compaction phases of a project.

The technology has been used for various paving applications, such as resurfacing work for the Singapore Grand Prix, the Spring Mountain motorsports facility in Las Vegas, and Frankfurt Airport runways in Germany and other high-profile projects requiring tight tolerances.

Another new technology for paving — Pavelink — which can be paired with existing Topcon solutions such as SmoothRide will also be available at CONEXPO. It is a cloud-based logistics mobile application for asphalt paving workflow between asphalt plants, delivery trucks, the company office, and paving site.

Murray Lodge, Senior VP of Construction for Topcon Positioning Group, says, “It is a revolutionary new system connecting every stakeholder in real-time throughout the paving process for more efficient daily job management resulting in better use of materials, fewer overages and paver stoppages, and overall greater return on investment.”

Topcon's SmoothRide system was also recently used to resurface the Silverstone racetrack in the United Kingdom. During CONEXPO, Topcon will feature Formula 3 driver James Roe Jr. to share his perspectives of how road resurfacing technology like SmoothRide is helping make tracks smoother for faster and safer racing.

Lodge says, “Racetrack paving is specialized work with extremely tight tolerances for a high-performance, high-speed environment and an excellent use case for how our precision systems can help contractors. We are looking forward to having James speak with visitors at CONEXPO about his experiences as part of our focus on intelligent paving solutions and how they are accelerating smoothness and safety, keeping jobs on schedule and profitable on projects around the world.”

Roe says he understands how Topcon resurfacing technology helped racing courses such as the Silverstone, a cornerstone of British motor racing.

Roe says, “I clearly recall how difficult it was at Silverstone before it was resurfaced in 2019 with the SmoothRide system. There were huge amounts of standing water building up after heavy rainfall that wasn’t draining off. Obviously when you are in a race traveling at high speeds, it’s not an ideal scenario from a safety point of view, and races had to be postponed or cancelled, affecting the whole event. The technology is a state-of-the-art product that will benefit the motorsports industry from both a safety and performance point of view.”

In addition to daily discussions with visitors to the Topcon booth N12701 throughout the week of the CONEXPO event, Roe will also host a special “trackside chat” on paving and racing on Thursday, March 12 at 2 p.m. at the booth.

This analyst report discusses how using predictive performance engineering, OEMs will be able to turn complexity into a competitive advantage.
July 1, 2022
On-Highway