Truck platooning continues to be an area of development for some commercial vehicle OEMs who believe there is still opportunity for the technology to advance and become more widespread in some markets. 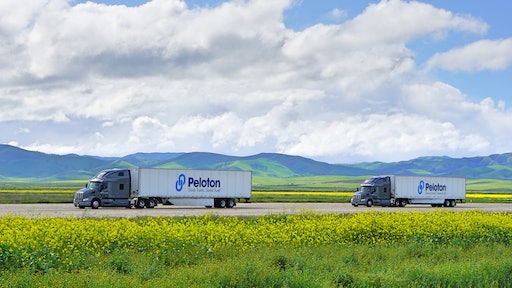 Truck platooning is expected to continue to make strides in 2020. Automated linking of two or more trucks has a long way to go, though, before becoming a commercial reality, experts say.

Companies like Peloton Technology (Peloton) have been testing truck platooning in the United States, while others have tested in Europe, with the goal of improving related technologies and systems, such as Vehicle-to-Vehicle (V2V) communications. In the coming year, experts are anticipating more platoon testing, technology refinements and broader industry discussions about standardizations.

Read more about truck platooning in the article "Follow the Leader."

For years, Peloton has been testing its PlatoonPro, a driver assist technology, that uses V2V communications, radar-based active braking, and vehicle control algorithms.

“We have seen very high percentages of utilized platoon miles, more than 80%,” she says. “Platooned miles per day have exceeded 600 mi. (965.6 km) per truck in some cases.”

Tests in Europe have eased driver skepticism, she says. European stress tests on drivers showed no difference in neurological activity between platoon runs and traditional truck driving. Those tests were conducted in Germany as part of a seven-month long project supported by the German Federal Ministry of Transport and Digital Infrastructure with participation from truck OEM MAN Truck & Bus, carrier DB Schenker, and Fresenius University.

In a project called Sweden4Platooning, the Swedish government funded efforts for Volvo Trucks and Scania Trucks to develop inter-operable platooning capability. The project, which is testing the viability of platooning among different truck brands, is important because in Europe, smaller fleets are more common than in the United States.

In 2020 in the United States, Peloton has begun on-highway testing with its PlatoonPro and AutoFollow systems. AutoFollow is an automated system that uses V2V communications to enable a single driver to drive a pair of trucks.

“For our AutoFollow system, we expect to begin on-highway testing with safety drivers in several states, using best-in-class safety protocols for testing driverless vehicles,” she says. “This will help us improve our system to better adapt to real-world challenges and road conditions, as well as improve our system’s user experience through continual feedback from our team of in-house professional truck drivers.”

Linking hardware on the road

Peloton is partnering with Purdue University on a Department of Energy-funded project to test on-road truck platooning, especially on hilly terrain. Platooning is tested using two trucks, with drivers in both vehicles. The driver in the rear vehicle doesn’t operate the foot pedals during platooning and the two can decide to stop, or dissolve, platooning at any time.

“Drivers are also able to directly communicate with one another about road conditions or lane changes using a foot-pedal-based dedicated push-to-talk radio link,” Tam says.

She added that drivers have responded favorably to the truck platooning.

“Fleet drivers feel the system is easy to learn and use following a one-day training,” she says. “Drivers must complete approved training before they can platoon, in addition to meeting all the same training, certifications and hours-of-service requirements as non-platooning drivers.”

In the Peloton-Purdue tests, the front truck is equipped with a forward-looking camera that is sent via a video feed to a display in the rear truck. The acceleration and braking systems are linked and automated during platooning. Driver controls interact with the truck, GPS and visual short-range communications. Truck-to-cloud connectivity alerts drivers to traffic and weather events up ahead. Coordinated gear shifting is being tested out, as well.

“Peloton and Purdue, specific to algorithm development for platooning, have been developing robust algorithms for hilly terrain,” says Greg Shaver, engineering professor and faculty scholar at Purdue. “Then we've been simulating the resiliency of that system, those systems to variations and route and cargo weight.”

One of the truck platooning issues waiting to be solved is that of cars and other vehicles cutting in between platooning trucks.

“Although infrequent, cut-ins can be addressed safely by the platooning system,” she says. “Peloton solutions use system sensors and controls to dissolve platoons and/or extend the distance between platooning trucks automatically when a potential cut-in is detected.”

When a level one platooning system dissolves, Tam says, the system notifies both drivers that the system has dissolved.

“If there is about to be a cut-in between the platooning vehicles that the follow driver does not react to, the platooning system preemptively dissolves the platoon,” she says. “Only after the system grows the gap between trucks to a safe following distance does it return longitudinal control back to the rear driver. If the front driver has a vehicle cut in front of him, the system will preemptively grow the gap between the trucks, sending braking signals to that follow truck even before the front truck has begun to slow down through near instantaneous V2V.”

For platooning to progress to the next level, V2V communications between the tractor and trailer, as well as other vehicles in the platoon, needs to evolve. Peloton’s Tam expects that technology to improve in the coming year and beyond.

The company released AutoFollow in July 2019. The system is categorized as SAE Level 4 (L4); with SAE Level 5 being the highest level of automation, according to SAE International.

Peloton’s automated systems have the potential to greatly improve fleet efficiencies and allow the industry to better deal with challenges like the professional driver shortage, Tam says.

“Robust V2V connects active truck safety systems and a fully automated follow truck with a driver-controlled lead truck to platoon,” she says. “Peloton’s AutoFollow system combines the experience of a human driver in the lead truck with state- of-the-art sensors and hardware in the follow truck to greatly simplify many of the technical challenges the vehicle automation industry faces with deploying standalone SAE Level 4 driverless systems. AutoFollow offers broad applicability for the trucking industry on a rapidly increasing set of routes, weather conditions, and traffic conditions, expanding these operations much more rapidly than single vehicle L4 solutions, which require that HD (high-definition) maps be created and kept current for all routes.”

For truck platooning to receive widespread commercial and regulatory support, safety must be not only a top priority, but an integrated part of each system.

V2V standards between tractors and trailers and between vehicles in a platoon is becoming a focal point at several industry symposiums and committee meetings, including those for SAE and ATA.

For one, tractor and trailer communications will need to be implemented, despite the limitations of the seven-pin connector.

“It just has to be that the tractor and trailer are integrated as a whole for any driver assisted system for autonomous systems to work safely,” Stegall says. “Once you have that structure in place where you're getting data and you're putting electronic braking systems into play, when you're getting electronic communications, not only is it the ability to control information, the next item is knowing the health of both the tractor and trailer together as a whole system.”

Whether V2V will be built using DSRC (digital short-range communication) or 5G LTE cellular platforms in platooning when communicating between vehicles and other vehicles, the IoT, people and roadside infrastructure, remains to be seen.

Read more: 5G Enables the Next Wave of Connectivity

“It's going to be a little bit of both, I think, because cars are going to have both and I think trucks have both,” he says. “Vehicle to roadside is ultimately going to be defined by DOTs (federal and state departments of transportation), but there will be a combination of technologies, depending on what works best in certain situations given what it’s like now with automotive. It's just what fits the right niches.”

“This truck equipped with active truck safety systems and specs is the building block for platooning trucks’ linked safety and closer following enabled by electronic V2V,” she says. “As these safety systems improve and become more adopted by today’s fleets, we expect there to be additional interest from fleets in deploying platooning systems. In return for equipping trucks with these active truck safety systems and specifications, fleets are able to platoon and save fuel, creating a tangible economic benefit for adopting the latest safety equipment.”

Communicating in the cloud

The next frontier in truck platooning will be connecting vehicle-to-everything (V2X) communications to the cloud.

“Be it blockchain or be it some other way, all the stakeholders in the food chain get the data that they need to know about that platoon being safe,” Stegall says. “It’s about being able, from an enterprise system standpoint, to manage that in a way in the cloud where all the data's being recorded that’s needed for regulation, for maintenance and core performance prognostics for the shippers, for the people who own the trailer, who own the tractor.”

Now that more attention is being paid to tractor-trailer communications, Stegall is optimistic about truck platooning technology.

“I'm bullish on the technology and I feel very confident, well, much more hopeful I think now than I did a couple of years ago, because the industry is finally addressing the tractor-trailer interface,” he says.

Other entities are less positive about platooning. In early 2019, Daimler Trucks announced it was pulling back its truck platooning investment.

“Daimler Trucks has tested platooning for several years, not only but especially in the U.S., where benefits would be expected to be the most substantial,” according to a company statement at that time and recently reaffirmed to OEM Off-Highway. “Results showed that fuel savings, even in perfect platooning conditions, are less than expected and that those savings are further diminished when the platoon gets disconnected and the trucks have to accelerate to reconnect. At least for U.S. long distance applications, our analysis showed no business case for customers driving platoons with new, highly aerodynamic trucks.”

Despite some pulling back on their research and testing, truck platooning continues to develop in the U.S. and Europe, with high expectations for the coming years in technology advancements and industry adoption.