The first self-propelled cranes consisted of a rigid frame mounted on railroad or traction wheels, and helped pave the way for today's self-propelled hydraulic cranes. 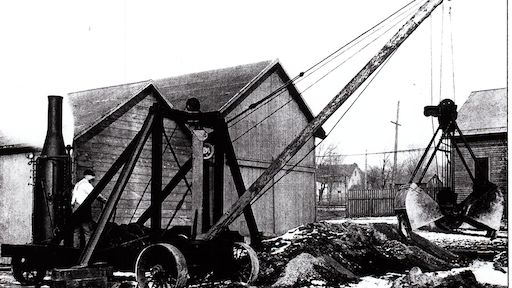 At 7-1/2 tons shipping weight, the No. 331 Baby Portable Excavator and Loader was a baby only in that it was the smallest such machine in the Byers line. It was rated at 4,000 pounds or 1/2 cubic yard with a standard 20 foot boom, and was capable of at least two cycles per minute.

While the truck-mounted crane provided construction cranes with unprecedented mobility when it was developed in 1919, the concept of a self-contained mobile crane that traveled freely on the ground predated it by several years.

Steam-powered cranes mounted on self-propelled traction wheels were developed as early as 1909, when the John F. Byers Machine Company of Ravenna, OH, was producing its Model 328. This machine consisted of a rigid frame that could be mounted on railroad or traction wheels, and had an upright boiler at one end and a boom, shovel front or skimmer that swung roughly 180 degrees on the other. Byers produced several models of these machines, and by 1919 offered them with gasoline or electric power as well as steam, and with optional crawler tracks under the boom end.

While it was certainly more flexible than a rail-mounted crane, lack of mobility was the main drawback of the traction wheel design; it was slow and not very maneuverable. The truck-mounted crane solved this, but a need remained for a crane that was mobile and free-traveling, but that did not need to travel under its own power at highway speeds.

The exact evolution of the self-propelled, full-revolving crane is not clear. Universal Crane Company, which had developed the first truck-mounted crane, was known to have offered full-revolving cranes on cab-free carriers with steel wheels and solid rubber tires in the early 1920s. Photos of these cranes show no evidence of a visible drivetrain, indicating that they were towed behind trucks. While obviously limited by lack of self-propulsion, these cranes otherwise had the same capabilities as a truck crane but from a smaller footprint.

Eventually, these cranes came to be self-propelled on pneumatic tires. This gave them limited over-the-road capabilities under their own power, although they could not match truck cranes in travel speed. These later self-propelled lattice cranes were rarely used in general construction, but their low travel speed made them well-suited for industrial applications, making lifts in various places of a sprawling plant or refinery.

As truck crane capacity soared past 100 tons in the early 1960s, self-propelled cranes did not keep pace. Self-propelled lattice cranes were phased out in the 1970s and 1980s along with their smaller and mid-sized crawler and truck-mounted counterparts in favor of self-propelled hydraulic cranes.

The Historical Construction Equipment Association (HCEA) is a 501(c)3 non-profit organization dedicated to preserving the history of the construction, dredging and surface mining equipment industries. With over 4,000 members in 25 countries, activities include publication of a quarterly educational magazine, Equipment Echoes; operation of National Construction Equipment Museum and archives in Bowling Green, OH; and hosting an annual working exhibition of restored construction equipment. Individual memberships are $32.00 within the USA and Canada, and $40.00 US elsewhere. HCEA seeks to develop relationships in the equipment manufacturing industry, and offers a college scholarship for engineering students. Information is available at www.hcea.net, by calling 419-352-5616 or e-mailing info@hcea.net.

Use of aluminum tubes and piping for thermal management in electric vehicles offers many benefits in comparison to other materials such as steel or rubber.
February 26, 2020

Test- and simulation-centered validation offers several advantages which engineers must weigh to choose the approach which best fits their design needs.
February 25, 2020

Increased use of technology and a shift in the way equipment is utilized will bring about many changes for OEMs in the heavy equipment market in 2020.
ACBM Editorial Staff
January 21, 2020

The recipients of the iF DESIGN AWARD 2020 have been honored for advancements in electrification, automation and overall improved heavy equipment designs.
Sara Jensen
February 21, 2020

Beyond the Data Sheet: Using Real-World Variances to Develop Sensors for Off-Highway Environments

A team of Doosan employees will oversee equipment final assembly and inspections stateside, enabling customers to potentially receive their equipment within 4-6 weeks after an order is submitted
Doosan Corporation
February 5, 2020

Counterweights made of cast iron offer the durability and reliability necessary for use in heavy-duty off-highway equipment applications.
January 20, 2020
Follow Us