An anticipated demand increase in a specialty vehicle for glycol recovery warrants a reevaluation of vehicle efficiency and system redesign. 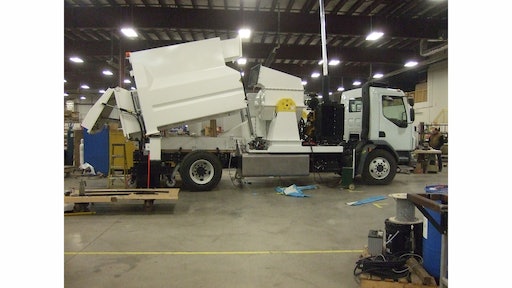 Inland Technologies Canada Inc. has technically been in the glycol recovery business since it was Inland Oil back in the 1980s. Inland Oil had a fleet of vehicles that went throughout Eastern Canada to collect used oil from businesses and garages, which it recycled and disposed of the waste. “When we picked up the oil, we ended up with the glycols as well, so we broke them down via biological treatment systems to dispose of them properly,” explains Richard Johnson, Product Development Manger at Inland Technologies.

Canada has strict environmental legislation that prompted airports to start a program to collect the glycol impacted storm water from the aircraft de-icing fluid. When Inland received the contract, because of its existing experience in treating automotive glycols, the volume of fluid being handled went from a few thousand liters to over 10 million liters from Halifax, Nova Scotia airport alone.

The vehicles used at the time for the glycol collection worked well but not at optimal efficiency. Johnson worked with the OEM provider on small improvements to make the machine more user friendly and efficient. Eventually, Inland saw a potentially huge increase in industry demand as the U.S. EPA looked to tighten its regulations around airport fluid contaminants, along the same vein as Canada was already doing.

Johnson knew there was a strong need for more significant improvements and faster delivery of vehicle production, which the supplier was not interested in pursuing, as it was a diversified market apart from its core vacuum vehicle product line. “That’s what drove Inland to look into designing and supplying its own vehicle, the Glyvac. We went back to the drawing board to make the vehicle simpler, easier to use and more efficient overall with fewer maintenance needs,” he says.

“The previous vehicle didn’t do a bad job of collecting the fluid; it just used a large fan and a lot of horsepower to do it. We consulted with engineers to reevaluate the fan collection system, and they were able to redesign it with a much simpler air path that would use the intake air more efficiently. In doing so, we went from using a 325 hp engine to a 175 hp engine and were able to decrease the size of the fan necessary,” Johnson says. That modification alone translated into about 35% savings in fuel costs.

When the pick-up head goes to the ground, the operator tells the air to engage from inside the cab with the flip of a switch. The liquid that’s on the ground is sheared off at a wind speed pressure of approximately 300 km/hr, vaporizing the glycol. “At this point, we need to separate the vapor back into air and liquid again.”

The patented three-stage fluid separation system takes the air from the rear intake to the front blower via three sets of specially designed and configured chevron baffles of increasingly tightening bends. Stage one is the gentlest of bends, designed to take out the bulk of fluid like snow and slush. The second stage takes any remaining droplets out, and the third and tightest bend stage removed left over moisture from the air. “The cleaned air is 99.9% free of any glycol fluid or moisture,” says Johnson. “We reuse the air and force it back through the pick-up head through a narrow gap which speeds it up and the suction process begins again.”

The fan is driven by a purpose-built closed-loop hydrostatic drive system, where the previous vehicle used a mechanical clutch system that required the operator to leave the cab to engage and disengage the head each time. “The operators definitely appreciate being able to stay in the cab, because when these vehicles are showing their true value, it’s pretty bad weather out,” says Johnson.

The direct drive hydraulic system’s simpler design with fewer moving parts also reduced the maintenance time and costs, and made the vehicle easier to operate and easier to train.

“We have a long to do list that we would like to see on the next vehicle generation,” says Johnson. Right now the Glyvac currently is built on a third party chassis, and the low speed of operation makes emissions systems difficult to work with. “We don’t build up a lot of heat. We’d like to design the chassis using a totally hydrostatic system to drive our collection system and another one to drive the vehicle so the engine can always be running at an optimum rpm. Then we can be using the engines the way they were designed to be used.

“We don’t like to sit still,” says Johnson. “It was important then, and it’s important now that we continue to enhance the vehicle and improve its efficiency, safety and operation. Whether we achieve this in house or through outside suppliers will be determined in the next phase of vehicle development.”

There are three key areas OEMs can look at not just in terms of cost management, but also revenue optimization that leaves them in a better position when the COVID-19 pandemic has finally abated.
Gary Brooks
February 12, 2021
Follow Us