Case has introduced its new CX470C excavator which is Tier 4 Interim compliant and provides improvements in fuel economy as well as productivity. 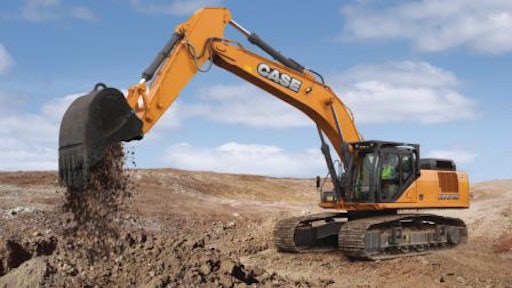 The CX470C MEX is designed for heavier loads and larger buckets (up to 4.13 yd3 or 3.16 m3), achieving higher productivity in large excavation jobs and high-volume truck loading. The Retractable Undercarriage version provides undercarriage width adaptability for transport between jobsites.

Boom Economy Control (BEC) automatically reduces engine RPMs and hydraulic power to the boom when speed and power is not a priority, such as when swinging back to the hole. Swing Relief Control (SWC) technology manages the hydraulic power allotted at the start of the swing operation, and Spool Stroke Control (SSC) creates an automatic pressure adjustment to meet demand during digging operations, but without building unnecessary pressure. Then, the feature of Auto Economy Control (AEC) lowers RPMs when the joysticks are inactive.

Also boosting fuel economy and performance are engine improvements such as  computer-controlled fuel delivery and variable geometry turbocharging, as well as automatic matching of engine performance and RPMs to power demands and hydraulic system requirements.

“Typical CEGR systems lose fuel efficiency, but with the Case Intelligent Hydraulic System technology and engine improvements, we’ve actually increased fuel efficiency on the Case CX470C excavator by 5% over our previous B Series model,” O’Brien explains. “And all of our Case C Series excavator models continue to be in the top of their class for productivity.”

With up to 5% faster cycle times than the previous model, the new Case CX470C excavator can move more material and load more trucks per hour.

The boom and arms, as well as the mainframe and undercarriage structure, have been redesigned for this additional capacity, delivering improved, world-class durability.

Noise reduction improvements, including vibration refinement on the cab’s reinforced tubular structures, create an extra-quiet cab environment, with automotive-like noise levels as low as 72 dBa. “It’s like being in a car even when the excavator is running at full throttle,” O’Brien notes.

As in other C Series models, the cab on the new Case CX470C excavator provides 7% more overall space and 25% more airflow. Air conditioning performance also has increased by 8%. Standard rearview and optional sideview cameras feed video to a 7 in. high-definition LED monitor in the cab, enhancing operator confidence and jobsite safety during machine operation.

“The large, clear monitor in the Case C Series excavators compares favorably to what you’d find in a luxury automobile,” O’Brien says. The LED screen also presents to key operating data, including a new function which provides fuel consumption per hour. “Operators can use this information to refine fuel efficiency for their particular operation,” he says.

The CX470C excavator also includes a standard air-suspension seat and an in-cab auxiliary hydraulic setting system with a new option for 10 memory-recall, attachment-flow settings to make tool changes quick and easy for operators.

These improvements in operator comfort features are complemented by the added safety of a full ROPS structure around the cab.

Case offers a range of attachments for the CX470C and other C Series excavators, including Case Smart Digging Systems components such as pin-on buckets, coupler buckets, the Case Multi-Fit Coupler and the SmartFit bucket tooth system.

The new Case pin-on buckets are available for the CX470C in heavy-duty, heavy-duty high-capacity, severe-duty, and rock digging type designs, allowing the machine to be productive in a wide range of applications. The Case Multi-Fit Coupler offers complete hydraulic latching, enabling excavator operators to quickly attach and detach buckets and other components without leaving the cab. Designed for the Multi-Fit Coupler, Case coupler buckets feature integrated bucket pins to prevent any loss of breakout force that might otherwise occur when using a coupler device.