Isuzu announces it has begun production on new models of its NPR ECO-MAX, NPR-HD, NQR and NRR trucks which include clean and efficient engines. 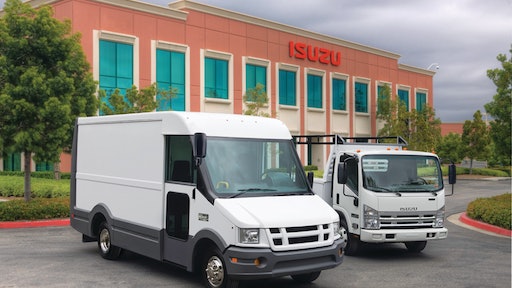 “With the introduction of our latest models, Isuzu dealers will continue to offer the widest array of low-cab-forward trucks in the industry,” says Shaun Skinner, executive vice president and general manager of Isuzu Commercial Truck of America. “We’re confident that, with this model line-up, Isuzu will be the best-selling line of low-cab-forward trucks in the U.S. for the 27th year in a row.”

The NPR-HD is available in Standard Cab and Crew Cab models, both powered by the Isuzu 4HK1-TC 5.2-liter turbocharged diesel engine and both posting GVWRs of 14,500 lbs.

The NQR, also available in both Standard Cab and Crew Cab models, features the 4HK1 engine as well but boasts an increased GVWR of 17,950 lbs.

The NRR available in Standard Cab, also features the 4HK1 engine and a GVWR of 19,500 lbs.

In addition, the 4H engine can run up to 10,000 miles between oil changes—minimizing downtime for maintenance—and boasts an astonishing B10 durability rating of 310,000 miles—meaning that 90% of 4H engines will reach that mileage before requiring an overhaul.

Like all Isuzu N-Series trucks since the 2011 model year, the 2013 models meet EPA 2010 and California Air Resources Board HD-OBD emissions standards, and are clean-idle certified—the first medium-duty trucks in the world to meet all of these stringent standards. Isuzu N-Series trucks are the first in their class to offer Selective Catalytic Reduction (SCR) technology with Diesel Exhaust Fluid (DEF) injection to reduce NOx emissions by 85%.

New for 2012 is a power take-off (PTO) option for the NPR ECO-MAX’s standard Aisin six-speed automatic transmission. Under specifically determined engine conditions, when PTO mode is selected, the torque converter will lock up automatically to eliminate slip and deliver more power and better control when optimum off-the-line acceleration is needed.

Like all 2012 and 2013 Isuzu trucks, the NPR ECO-MAX—which meets EPA 2010 and CARB emissions standards, and is clean-idle certified—can be driven up to 10,000 miles between oil changes and has a class-leading B10 durability rating of 310,000 miles.

The 2012 N-Gas models are powered by the General Motors Gen IV Vortec 6.0-liter V8 engine producing 297 hp. The powerplant is mated to a six-speed automatic transmission with double overdrive and lock-up torque converter for enhanced fuel economy and performance.

A full range of gasoline-powered models is available, including the 12,000-lb. GVWR NPR and the 14,500-lb. GVWR NPR-HD. Both are available in Standard Cab and Crew Cab configurations with wheelbases stretching from 109 to 176 in. in length.

Production began in October 2011 of the revolutionary Reach commercial walk-in van at Utilimaster Corporation’s assembly facility in Wakarusa, IN.

The Reach, with a body designed by Utilimaster atop a rugged Isuzu NPR chassis and powered by Isuzu’s 4J 3.0-liter diesel engine, achieves 35% better fuel economy than a traditional commercial van while offering the functionality of a custom-built work truck along with the styling and ergonomics of a cargo van. The Reach offers best-in-class mileage and meets the latest EPA emissions standards, yet still provides true commercial truck capability and delivers a dramatically lower cost of ownership than traditional walk-in vans.