JCB is making a series of upgrades, such as fuel efficiency improvements, to its range of tracked and wheeled excavators. 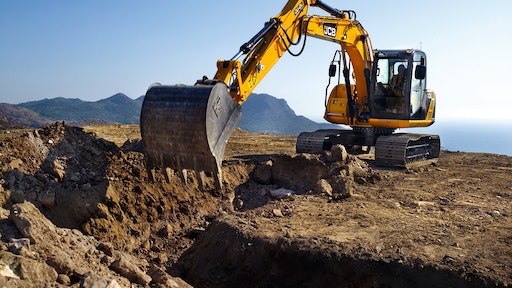 JCB announces a series of major changes to its 23-strong range of tracked and wheeled excavators with the unveiling of a line-up of stylish, productive and more efficient machines.

In a ground-breaking move some of JCB’s excavators are being powered by JCB Dieselmax engines for the first time ever – and in some cases deliver a staggering 24% improvement in fuel efficiency.

In addition all 19 tracked and four wheeled models from 11 to 46 tons get a brand new cab and also take on a new look, a restyle which gives the JS range a stronger more rugged appearance.

JS MACHINES GET THE DIESELMAX DIFFERENCE

JCB is now installing its record-breaking JCB Dieselmax 444 engine into its JS range, specifically into the following models:

In addition, the 15 ton JS145W and the 17 ton JS160W wheeled excavator will also be powered by the 4.4 liter engine. The Dieselmax engine replaces the Isuzu unit.

The Stage IIIA/Tier 3 JCB 444 Dieselmax engine will set a new benchmark in excavator reliability and performance. With a larger engine displacement, the 97 kW/130 hp Dieselmax delivers up to 23% more torque in the JS 160, JS180, JS145W and JS160W machines – or 532 Nm of torque.

The benefit the JCB Dieselmax engine brings to customers is the ability to move earth or rubble with far more ease. The engine response time is much faster and in the case of the JS160 and JS180 models, the engine operates at lower rpm – up to 10% lower - increasing the overall efficiency of the machine and lowering noise levels.

The cooling package is now larger and quieter, mainly because of a 9% bigger cooling fan which rotates more slowly.

While the pedigree of the 4.4 liter JCB Dieselmax engine is well proven after several years powering backhoe loaders and Loadall telescopic handlers, the engine has been in all JS160s and JS180s since the middle of last year, with excellent customer feedback.

The largest market segment for excavators is in the 20 to 24 ton weight range, accounting for just over one-third of all machines sold. A total of 80% of these are used in the developing economies, which are not subject to the more stringent U.S. or European engine emissions legislation. JCB also announces that the 4.8 liter Stage II/Tier 2 JCB Dieselmax engine will power all 20 to 22 ton JS excavators destined for these markets.

The model numbers are:

While engine power rating remains at 128 Kw or 172 hp, JCB has made a number of key changes, in particular incorporating new advanced hydraulic technology, with optimized pump settings and revised spool configuration. JCB has also modified the Advanced Management System to ensure that the excavator defaults to Economy mode on start-up.

These enhancements and the fitting of a Stage II/Tier 2 JCB engine to the JS200, JS210 and JS220 models improves fuel efficiency by a staggering 24%, which will deliver a huge reduction in operating costs for customers in these Tier 2 markets.

For example, a Chinese customer working a JS200 for 3,500 hours per year will save £10,000 compared with the previous model.

And thanks to the incorporation of the same advanced hydraulic technology on Tier 2 machines, with optimized pump settings and a revised spool configuration and the introduction of a revised electronic control system, fuel efficiency improves by 11% on each of these Tier 3 models with no engine modification. So, a British customer working a JS200 for 1,500 hours per year will save £2,750 compared with the previous model.

Improvements in fuel efficiency have been achieved by using the same advanced hydraulic technology and revised electronic control system in the heavier models as their smaller stablemates.

Tier 4 Interim compliance has been achieved by using Isuzu engines and by incorporating a variable geometry turbocharger, exhaust gas recirculation and a diesel particulate filter.

JCB is introducing a new cab across its range of JS excavators and among one of the most important changes is on the front windscreen with the split between the top section and bottom section of glass now 125 mm lower in response to customer feedback. It’s now a 70/30 split, providing the operator with much improved visibility of the digging area.

A positive seal has also been created between the top and bottom sections, resulting in zero dust ingress into the cab. The bottom section of glass can be removed easily and conveniently stored within the rear window stowage area, again improving visibility to the digging area.

The front upper corner of the cab has been shifted forwards to accommodate a flat glass panel, instead of curved glass. This makes replacement much easier and less costly. Both the upper and lower sections of glass are laminated for additional protection and scratch resistance, as is the new roof glazing, which was previously polycarbonate.

Other cab improvements include a more spacious storage area behind the operator’s seat for tools.

For all models below 24 tons, ROPS will be integral to the cab – achieved through internal strengthening of the cab and machine structure. Externally, the ROPS cab will look the same as the non-ROPS cab, however a data plate inside the cab will highlight to the operator that it is the ROPS-protected version. For all models over 24 tons, a bolt-on ROPS cage will be fitted on to the machine.

Falling Objects Protection (FOPS) is equally important to JCB customers, particularly in the demolition sector and FOPS protection is available for all models for both front screen and roof screen. This can be factory-fitted or retro-fitted without the need to make any modifications to the cab structure

JS RANGE SAYS IT WITH STYLE

The new JS machines come with an all-black counterweight, complete with yellow chevrons on the corners, delivering a more rugged appearance. The new JCB livery looks very prominent in the middle of that vast expanse of black on the counterweight.

The side access doors have been updated and strengthened, again adding to the durable and robust look of the machines. The upper structure side skirts on all models have also been strengthened, greatly reducing the potential for impact damage.

The color scheme on the side panel next to the access door has changed as well. The black of the cab has been brushed back onto the metal, giving more prominence to the JCB livery on the side of the machine and blending the cab more elegantly with the rear.