The Volvo Group announces it will begin production of its UD bus range, serving customers in India and other markets. 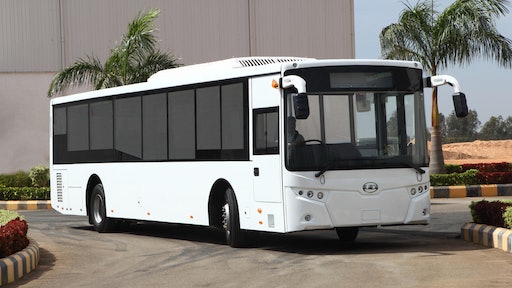 The Volvo Group takes an important strategic step with the introduction of a UD bus range developed specifically for growth markets.

This was announced at a press meeting in Bangalore, India. UD buses are first being introduced in India. Additional growth markets will follow over the coming years.

“We will introduce a new UD bus range specifically designed for growth markets. The segment targeted has high growth potential. UD buses have had a strong brand presence in Japan and South East Asia in the past. Now we renew and adapt the buses for India and other growth markets,” says Akash Passey, Senior Vice President, Volvo Group’s bus operations, responsible for the international markets including Asia.

The UD bus brand will expand Volvo Group’s customer base, improve competitiveness and capture growth opportunities in India and other growth markets. The bus range will include both city buses and coaches.

The new UD bus range will be developed by leveraging the Volvo Group’s global engineering network in combination with its heritage of Japanese craftsmanship and reliability. In India, the new bus range will be supported by the Volvo Group’s distribution network, providing service and parts. UD buses will offer passengers a modern transport solution while at the same time focusing on the operational essentials: fuel efficiency, reliability and optimized uptime.

“By introducing a new bus range, we are offering growth market customers a product that has been developed to meet their specific needs. Just as we have done on the truck side of our business, we are positioning our buses according to customer segments in order to cover as much of the total accessible market as possible,” explains Olof Persson, President and CEO of the Volvo Group.

The Volvo Group has played an important role in the Indian bus market since the start of operations in 2001. The company has developed the public transport sector by establishing the premium coach segment, and thereby redefining the public view on traveling by bus. Today approximately 5,000 Volvo coaches and city buses are in traffic in India.

The production of UD buses will start in Bangalore during 2014. The first buses will reach the customers later this year. Besides serving the domestic Indian market, the UD bus plant in India will also serve as an export hub in the future.

Predictive performance engineering for heavy equipment
May 9, 2022
Follow Us