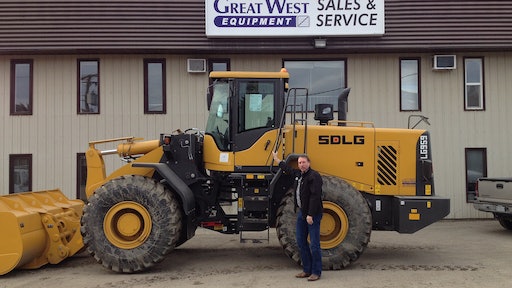 The newest edition to SDLG’s ever-growing dealer network is Canada’s Great West Equipment, based out of Vernon, British Columbia. The company, which has 11 locations in British Columbia and Yukon, will sell SDLG’s complete lineup of wheel loaders. It will also fully back the machines, providing extensive product support and service.

Roger Dobie, Vice President of Sales for the company, says that bringing SDLG to Great West will give customers an alternative to higher-priced, premium wheel loaders, especially when they are in need of a low-production machine.

“For our customers that in the past predominantly bought used loaders, SDLG wheel loaders will be a great option,” he says. “They have a great price point and are backed by superb product and service support.”

Many of Great West’s customers work in agriculture or general construction, among others, and should find SDLG wheel loaders ideal for their applications.

“There’s a whole group of customers out there that don’t need to run a wheel loader 24/7/365,” Dobie explains. “But they do need a quality wheel loader that’s backed by a great warranty and serviced by a great dealership, and that’s where SDLG and Great West can be successful.”

Great West stocks a wide range of construction equipment and has a team of well-trained sales and service personnel to back its products, including SDLG. The company will also offer SDLG’s 21st Century Product Support, which uses a central parts location to ship parts to customers and dealers often within 24 hours.

“There are two keys to success for SDLG in North America,” he explains. “The first is to have a great wheel loader that’s backed by great service and support. The second is to have a dealer network that really knows which customers the machines are suited for and can then provide them with top-notch support for years to come. With SDLG and Great West joining forces, we’re accomplishing both goals.”