Yanmar celebrates 20 years of its ViO system at INTERMAT 2015

Yanmar celebrated the 20th anniversary of its introduction of the zero tail swing concept, termed ViO by the company, at INTERMAT. 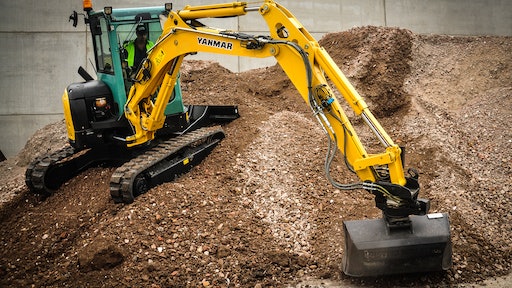 YANMAR, one of the pioneers in the history of compact construction equipment, and inventor of the "zero tail swing" concept, also referred to as "zero overhang," celebrated the 20th anniversary of this concept at INTERMAT 2015.

The first mini-excavator equipped with the Zero Tail Swing system, designated "ViO" by Yanmar, was unveiled for the first time at bauma, the world's biggest construction machinery trade fair, in Munich in 1995.

Zero Tail Swing functionality enables a machine superstructure to turn on its chassis while remaining within the radius of its crawlers.

The advantage of this system is that it makes the mini-excavators extremely maneuverable in tight or confined spaces or when working close to walls, foundations or other obstacles that restrict movement.

What is more, thanks to this configuration, the operator enjoys greater all-round visibility.