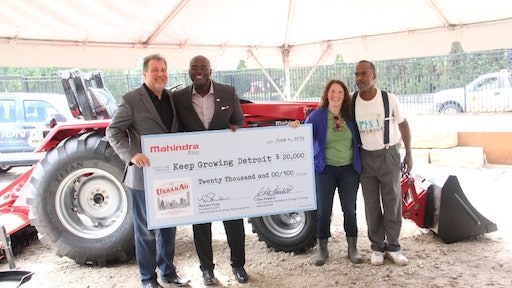 Mahindra USA, the world's number-one selling tractor brand based on volume, and the Troy, MI-based Mahindra North American Technical Center have joined forces to support the thriving urban agriculture movement in Detroit, MI. Expanding on its Urban Ag Scholarship Initiative, the Mahindra Urban Agriculture Grant Program made financial gifts totaling $100,000 to five non-profit organizations that are engaged in urban farming initiatives in the city. One of the farms received a new Mahindra tractor. Finally, Mahindra donated a new off-road utility vehicle to the City of Detroit.

"Mahindra is a global enterprise with affiliates in more than 100 countries," says Richard Haas, President and Chief Operating Officer of the Mahindra North American Technical Center. "At the crux of Mahindra's core values is a pledge to innovatively drive positive change in the lives of our stakeholders and communities, wherever we are in the world. Supporting urban agriculture in Detroit is a natural fit for Mahindra, given our position as the world leader in tractor production."

"Mahindra's global directive is 'Rise for Good,' and the power of this initiative is the ability to invest and help local communities Rise. Our support for these Detroit-based urban agriculture programs is a logical extension of Mahindra's existing Urban Ag programs. We are honored to partner in the rebirth of the city," says Cleo Franklin, Mahindra USA's Vice President of Marketing and Strategic Planning. "It is vital that we promote the consciousness of the farm-to-table connection and support this urban agricultural revolution, while at the same time continue to explore innovative ways to invest in the future of the agricultural industry."

Haas agrees, "Detroit is very much a city on the rise. Mahindra is looking forward to playing a part in its growth and return to prosperity."

Anand Mahindra, Chairman and Managing Director – Mahindra & Mahindra, says, "Setting up operations in the Detroit area is core to our strategy of building a global position in the automotive segment. Detroit is one of the world's great automotive development centers, so it was a pretty easy decision for us. But in reality, it was more than a straight business decision, as Mahindra and Detroit share some common DNA. Toughness, resilience, an aspiration to reach new heights and an unrelenting commitment to doing right by its people and communities. We are very excited about the opportunity to participate in the renaissance of Detroit, and this program is one way we can play a part in the great story that is unfolding here."

Detroit is one of the nation's pre-eminent urban agriculture sites. Increased demand for locally grown food, and efforts to improve the quality, availability and affordability of produce sold to residents—coupled with thousands of plots of vacant, arable land—make Detroit an excellent incubator for the farms and gardens that have sprouted in all areas of town. Urban farms also encourage entrepreneurialism, help workforce development by teaching employable skills, and boost the city and region's economy.

"Detroit is very much a city on the rise. Mahindra is looking forward to playing a part in its growth and prosperity going forward. This Mahindra Urban Agriculture Grant Program supports the outstanding efforts of several worthy organizations that are making a difference in the lives of city residents every day. Our program will enable more Detroit residents to get involved in growing their own fruits and vegetables, help make nutritious produce available at reasonable prices to greater numbers of people, and assist in beautifying and unifying neighborhoods through the cultivation of community gardens," Haas says.

Mahindra also invests in several agriculture-focused scholarship programs, including: five Urban Ag scholarships, four Women In Ag scholarships in partnership with the Future Farmers of America, and 12 Mahindra Texas Pride scholarships that are offered jointly with the Career and Technology Association of Texas, Inc.