The compact design and telescoping boom of a Grove GHC75 crawler crane provided cost savings and productivity improvements during a bridge repair project in New York. 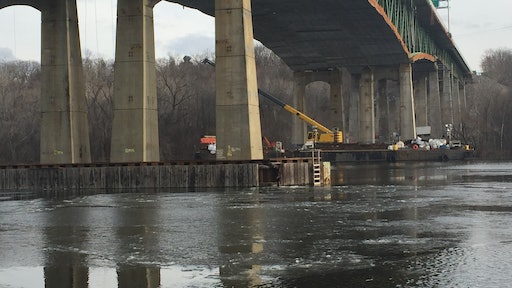 A recent project to repair the Patroon Island Bridge, which spans the Hudson River in New York, presented a unique challenge to contractors. A lifting solution was called for that could place a crane on a barge below the bridge, while traffic continued to flow above. In the end, a Grove GHC75 telescoping crawler crane provided an ideal solution.

Halmar/A. Servidone – B. Anthony, a joint venture contracting team consisting of Nanuet, NY-based contractor Halmar International and Castleton, NY-based A. Servidone Inc/B. Anthony Construction Corporation (ASIBACC), were tasked with the tricky set of repairs. The team chose the GHC75 for the project because of its stability and maneuverability.

Tom Valenti, engineer for ASIBACC, says the 75 USt capacity GHC75 struck the perfect balance between the stability of a crawler crane and the telescoping boom of a rough terrain crane.

“Any crawler crane will keep you balanced on the water due to its wide treads, like those of a tank,” he says. “What makes the GHC superior to the average crawler is its telescopic boom. We can move what we need to move with a simpler, more direct motion. There’s no need to swing the boom and sacrifice stability.”

The crane’s primary function was the erection of structural lifting towers, which had the company place steel piers in the water on which the bridge bearing sits.

“This was a project where we needed to thread the needle,” Valenti says. “We had to move 6 USt steel beams up to 80 ft. in the air with precision, all without disturbing the barge. The crane’s 118 ft. boom and low center of gravity allowed us to do just that.”

The compact 42 ft. 6 in. long by 10 ft. 6 in. wide footprint of the GHC75 also led to unanticipated savings for the company.

“We usually have to hire a tug boat to move us around the pier to get the crane in position during bridge construction,” Valenti explains. “Thanks to the compact nature of the GHC75 and its crawler crane maneuverability, we were able to service the bridge from a single position on the river, which resulted in considerable cost savings.”

The GHC75 offers the ability to pick-and-carry at 100% of its load chart and can swing loads a full 360 degrees. This makes it ideal for barge-mounted applications, as it can lift from any angle at which the water below positions the barge, and then the crane can lift or place loads from or to any location around the crane, providing maximum versatility.

The Patroon Island Bridge connects New York’s Albany and Rensselaer counties. The project began in June of 2013 and was completed in December of 2015. More than 70,000 people travel over the 1,795 ft. long bridge on a daily basis.

The joint venture rented the crane from Stephenson Equipment, which has been providing sales and rentals of construction equipment, paving equipment and cranes since 1957. The company serves customers from seven locations across Pennsylvania and New York. Stephenson Equipment is an official dealer of Manitowoc cranes, Grove cranes, National Crane boom trucks and Potain tower cranes.