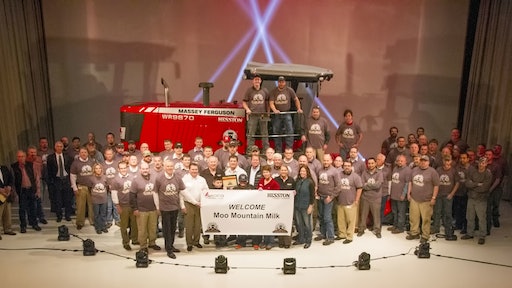 Hesston by Massey Ferguson, the industry’s leading hay equipment brand of AGCO Corporation unveiled its historic 100,000th windrower on Tuesday, March 29, 2016, in Hesston, KS. Hesston introduced the self-propelled windrower to the agricultural harvesting world more than 60 years ago — an achievement which was celebrated at the Hesston manufacturing plant by company executives, employees and special guests. The 70-year-old Hesston brand is a leading manufacturer of agricultural machinery, most famous for its high quality haymaking equipment since 1947. The Honorable David K. Kauffman, Mayor of Hesston, was in attendance and declared it “AGCO Hesston Windrower Day.”

“Manufacturing the 100,000th windrower is a significant achievement for AGCO,” says Robert Crain, AGCO Senior Vice President and General Manager, North America & South America. “The first commercially available windrower was manufactured right here in Hesston, KS, more than 60 years ago and they are still made here today. The dedication of all of our employees — past and present —have made the Hesston brand the leader in the industry.”

Attending the event was the purchaser of the historic 100,000th windrower — Ray Robinson, of Moo Mountain Milk in Burley, ID. Robinson owns six Hesston windrowers. He farms approximately 5,000 acres himself, and partners with other businesses to farm an additional 30,000 acres. Moo Mountain milks 20,000 cows and employs 350 people, including those at a milk plant he owns an interest in. Robinson, his son Justin and twin grandsons were flown to Hesston for the 100,000th windrower event and look forward to putting the new windrower into operation on the dairy farm as soon as it arrives in Idaho.

The 100,000th windrower is dramatically different from the first model of 1955, which launched the Hesston brand. Today’s WR9800 Series self-propelled windrowers are fuel-efficient and offer superior operator convenience. WR9800 Series windrowers are powered by reliable AGCO Power engines, led by the AP66-4F, a 6.6-L engine in the WR9870. This model is ideal for Hesston’s disc header, and offers 225 hp and the muscle to operate in heavy crop conditions such as winter forage, wet silage hay and hilly or rough terrain. The WR9860 is designed to perform toe-to-toe with any 6-cylinder windrower with its AP49-4F 4.9L, 4-cylinder QuadBoost engine, that boasts 195 hp and is an increase over the previous model. Both machines provide high field speed of 17.5 mph, plus a maximum road speed of 24.5 mph for quicker moves between fields, when equipped with RearSteer. The final model is the WR9840, rated at 137 hp, this machine is a perfect fit for draper and sickle head applications.