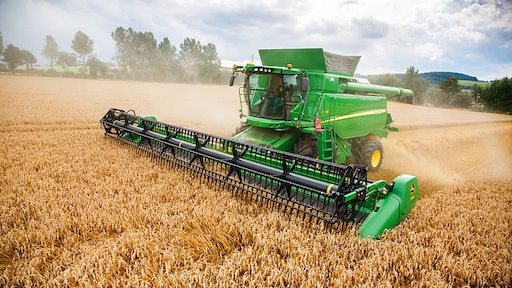 For model year 2017, John Deere T670 model walker combines will have significant enhancements to boost productivity, threshing capacity and straw quality for baling while making service and maintenance much easier and less time consuming. These are all benefits that U.S. and Canadian small grain producers will appreciate when it comes to harvesting during often tight windows and tough conditions.

According to Terry DeMay, Senior Marketing Representative for John Deere Harvester Works, the newly updated T670 Combine will lead the industry with several new features, helping to make it the most productive walker combine available.

“The new model year T670 combine has one of the largest active separation areas and largest cleaning shoe of any walker combine on the market today,” says DeMay. “We’ve increased productivity by 15% in wheat and increased unloading rates by 50%. We’ve also made it easier to switch between small grains and canola, and improved the service points to allow producers to spend more time harvesting and less time waiting.”

For customers harvesting both canola and small grains, the new T670 has a new swing-in Booster Bar that makes switching between crops easier and faster – often in less than 5 minutes – and easier to adjust as crop conditions change.

In addition, John Deere has increased the size of the overshot beater, concaves, separator drum and grate, and walker area as part of its updated T- concept solution. These are all designed to improve threshing speed, throughput, and straw and grain quality during harvest while making it easy to change over to other crops and optimize harvesting performance.

Greater throughput and capacity means operators need more speed to unload. As a result, the T670 with its Xtra Fast System can offload grain at 3.3 bushels per second.

The new T670 Combine has optimal maintenance intervals with easier access to those service areas and fewer filters to check and replace. To make servicing and cleanout more convenient, the new T-Series comes with an optional factory-installed 16-gal. air compressor with 33-ft. hose and three quick-coupler points to access different areas of the machine.

Like its predecessor, the new model T670 has a spacious, comfortable and quiet Premium Cab, and transmission options.

“Compared to the previous model T670 combine, this new model offers significant improvements that customers will quickly see and appreciate,” DeMay says. “When added up, these enhancements help producers harvest more acres per day and spend more time being productive.”

The newly redesigned T670 Combine from John Deere is available for model year 2017.