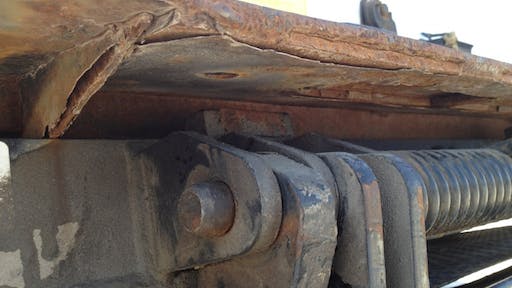 Winterland says that it is not unreasonable to expect eight to 10 years out of a cube van. However, after a few years rust was prevalent on many components coated with standard industry materials, while the lift gate coated with PRP MP remained in excellent condition. Winterland advises commercial equipment buyers to invest in corrosion protection at initial purchase to save on total overall cost of ownership.

PRP MP is a proprietary multi-step chemical process that creates a molecular bond between a co-polymer and the base metal, providing corrosion protection against magnesium chloride, calcium chloride, sodium chloride, as well as rock chipping, acid rain and extreme temperatures without the added cost and weight of galvanizing.

Winterland recognizes that many fleets and end users hesitate to make the extra investment in corrosion protection at the point of purchase—they want the cheapest model in order to keep costs down. He believes that if buyers are willing to pay a little extra up front that they won’t have to refurbish components at all during the equipment’s life cycle, saving thousands of dollars in potential refurbishment costs within a few years. “The bottom line is that trucks are a necessary evil and carry a heavy expense for business,” says Winterland. “Even just a little pinhole in the coating can start the blistering and peeling after a few years. I wish more manufactures would use the Alternative to Galvanizing to protect their frames and components, which get the most abuse from gravel and chemicals,” adds Winterland.

The electric supply company president explains that anyone, especially in larger cities, who is not investing in corrosion protection, is making a grave mistake because of the safety and liability issues. If there’s rust, it’s not safe, and if you have an accident with delivery personnel or someone else, then you have a lawsuit, refurbishment costs and about a week idle time at a body shop. Plus, you take the chance that the shop didn’t notice some of the structural damage. “My lift gate will undoubtedly outlast my truck—without any premature refurbishment costs,” says Winterland.

According to Phi Pierce, President of PRP Industries and developer of The Alternative to Galvanizing anti-corrosion system, lift gate refurbishments can cost as much as $2,000 per unit.  He explains that corrosion affects equipment costs, downtime, logistics and safety issues, but also a company’s long-term investment in their brand. “The back end of a company’s truck is often where a businesses’ brand identity is most prominent, and shoddy aesthetics due to corrosion can depreciate brand equity,” Pierce says.