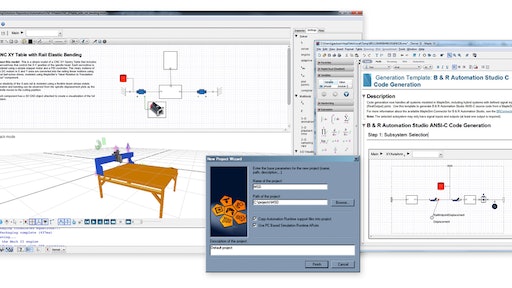 Maplesoft announces the release of a new product that allows engineers to integrate high-performance, multidomain system models from MapleSim into B&R Automation Studio. The MapleSim Connector for B&R Automation Studio is the result of a partnership between Maplesoft and B&R, the global leader in industrial automation, formed to bring together products from both companies to save engineers time and effort for hardware-in-the-loop simulations and controller development.

MapleSim is an advanced physical modeling and simulation tool that applies modern techniques to dramatically reduce model development and analysis time while producing fast, high-fidelity simulations. B&R Automation Studio is an integrated engineering development environment that allows the controller, drive, communication and visualization phases of a development project to all be configured in a single environment. With this new connectivity between products, complex engineering system models can be rapidly developed and optimized in the intuitive visual modeling environment of MapleSim, and then the high-performance, high-fidelity MapleSim models are automatically converted to code for easy inclusion into B&R Automation Studio. The model code is fully optimized for high-speed real-time simulation, allowing engineers to get the performance needed for hardware, software and operator-in-the-loop testing, without sacrificing fidelity.

“Engineers can save significant time by determining the properties of their system before building a physical prototype through system-level modeling,” says Dr. Laurent Bernardin, Executive Vice President, R&D, Maplesoft. “With the drag-and-drop physical modeling environment of MapleSim, Automation Studio users can easily add a system-level modeling phase to their workflow, without the need for difficult, time-consuming and error-prone mathematical derivations. With a system-level model, engineers can optimize for the desired behavior of individual elements without risk of unexpected side effects in other parts of the system.”

“This partnership offers our customers many real benefits,” says Kurt Zehetleitner, Technical Manager Automation Software, B&R. “By using MapleSim and the MapleSim Connector for B&R Automation Studio, automation engineers can dramatically reduce the time they spend developing and analyzing their models, with the potential to save literally months of work in some cases. The resulting high-fidelity models are so fast that they can be used directly in hardware-in-the-loop simulations. With more accurate models in the testing phase, fewer expensive physical prototypes are needed. In addition, controller design and optimization begun in MapleSim can then be continued in hardware-in-the-loop tests with B&R Automation Studio on the Programmable Logic Controller (PLC) level.”