New and refined capabilities for advanced driver assistance systems and autonomous vehicle technologies are included in the latest release. 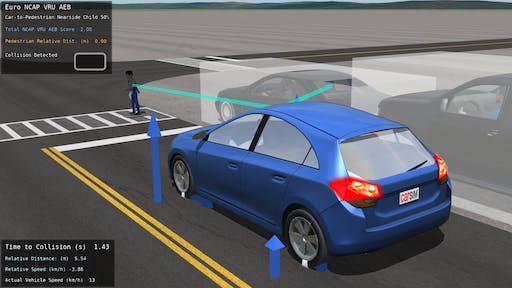 Mechanical Simulation announces the release of the 2020.1 versions of the vehicle simulation tools CarSim, TruckSim, and BikeSim.

The VehicleSim products CarSim, TruckSim, and BikeSim have long featured high-fidelity math models for vehicle dynamics that can reproduce physical test results. The math models run fast enough to support real-time simulation with hardware in the loop (HiL) and can support massive optimization projects involving hundreds of thousands of simulations.

This release includes new and refined capabilities for advanced driver assistance systems (ADAS) and autonomous vehicle (AV) technologies. CarSim and TruckSim have the optional capability to allow up to four high fidelity vehicles to operate in a single VehicleSim math model. The vehicles are able to sense and respond to each other, and each has fully detailed vehicle models with multibody dynamics, powertrain, etc. Even though the overall model has four vehicles, the simulation still runs faster than real time.

The improved path detector creates an instantaneous preview path. A cubic polynomial is constructed such that it approximates a clothoidal segment (Euler spiral). The preview path outputs include curvature, rate of change of curvature, and lateral offset of the path relative to the vehicle. The implementation uses a Kalman filter to estimate the curve fit based on noisy target point measurements.

The VS Terrain Utility has been updated to merge multiple road files to one consolidated road system. This enables users to easily create more complex and realistic simulation environments.

Mechanical Simulation has made considerable improvements to its vehicle models, including the introduction to a Virtual Steering Axis (VSA) or double ball joint for front suspensions in CarSim.

In past versions, the surface coefficient for tire rolling resistance was a constant. The coefficient now can vary depending on the tire's location.

"With the release of 2020.1 VehicleSim, ADAS and AV developers can quickly include the highest quality of vehicle dynamics with little effort. It has never been easier to put massive simulation power in the hands of engineers," notes Dr. Michael Sayers, CEO and Chief Technology Officer.