Philippi-Hagenbuch displayed its Rear Eject Bodies at MINExpo 2012, which are designed to make hauling and dumping in challenging work environments easier. 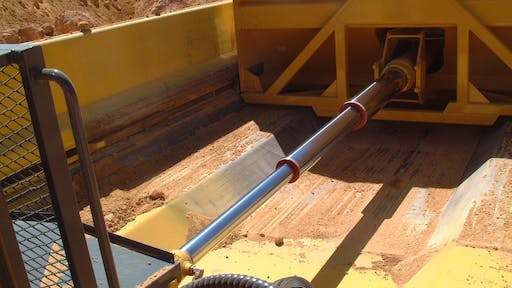 Philippi-Hagenbuch (PHIL) featured its line of Rear Eject Bodies at booth 6210 at MINExpo 2012 in Las Vegas. Featuring ease of use, safety, stability, minimal maintenance and increased productivity as hallmarks of its design, PHIL’s patented line of Rear Eject Bodies offer the ideal solution for challenging hauling applications from mine operations and underground hauling applications where overhead barriers inhibit traditional dump bodies as well as in general construction, road construction and sand and gravel operations.

Easily adaptable to any make and model of articulated off-highway truck as well as rigid frame trucks up to 100 ton capacity, PHIL Rear Eject Bodies curtail the challenges associated with traditional dump bodies. In eliminating the need to raise the body of the truck, the PHIL Rear Eject series allows for safely dumping materials while in motion and in the presence of overhead barriers. This versatility in operation increases efficiency without reducing stability by providing a lower center of gravity and allowing dumping on downhill slopes and conditions with a soft footing. Enabling trucks to spread material while driving further enhances efficiency. The ability to effectively empty the truck without raising the body augments safety where overhead barriers such as power lines, roof lines or bridges may pose as forgotten safety risks as well as in underground mining applications that have low overhead clearance.

Engineered to provide productivity enhancing solutions for the toughest hauling challenges, PHIL Rear Eject Bodies dump faster and easier – even in sticky applications. Without moving or raising the truck bed, the ejector blade pushes material toward the rear of the truck, while the tailgate automatically lowers down and material is completely ejected. The unique sweeping action of the blade virtually eliminates all material – even that material prone to sticking to the sides or floor of the truck bed. This effective dumping action provides for more dumps in less time significantly increasing jobsite productivity.

PHIL Rear Eject Bodies are also versatile enough to be used as auxiliary feeders within quarries and mines, providing an alternative tool for delivering material to a crusher or asphalt plant if a primary feeder malfunctions or breaks down.

Continuing the company’s long-held vision of designing solutions that improve productivity while minimizing maintenance, PHIL Rear Eject Bodies are constructed with a single hydraulic cylinder used to operate both the ejector blade and the rear tailgate mechanism. As the ejector blade moves to the rear of the body, the tailgate actuator that is located in the sides of the body begins to move to the rear of the truck. This motion, naturally supplemented with gravitational forces, lowers the tailgate simply and mechanically without the need for additional hydraulic cylinders. To further simplify the design, PHIL ejector bodies employ exclusive ejector guides integrated into the inside of the body, which provide smooth operation, while eliminating rollers that typically break and bind up and are costly and difficult to replace. Additionally, the bodies are constructed of high strength, abrasion-resistant steel to withstand years of use with little maintenance.

Because there are no external rails or guides required for the ejector blade movement, the Rear Eject Bodies provide enhanced ease of loading without the worry of the loader hitting an exterior rail, thus putting the truck out of service until the substantial repair is made. Increased capacity is also available with the expandability of sideboards if desired, as the ejector is fully contained within the truck body. Incorporating customer feedback and more than three decades of experience, PHIL eliminated all grease points with the exception of two, which are fully optional and in place to minimize noise in the track.