This technology was developed to eliminate needing the high power required to force the load down the entire length of the frame. 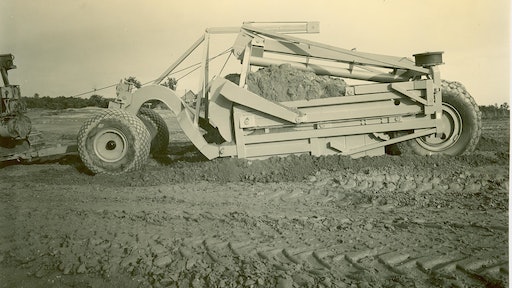 Not all of LeTourneau’s telescopic scrapers were unusually large. This Model LU Carryall has only an 11-yard heaped capacity, but this image shows the significant effect of the loading of the first of two buckets. It will soon be moved back, and the second bucket will load in its place.
Meier-Dailey Papers, HCEA Archives

Increased efficiency has always been a goal when designing construction machinery. Greater capacity, higher speed and increased productivity without costs being so high that they nullify the advantages.

Some machines lend themselves more easily to these principles than others. For instance, except for the very largest models used in mining, a motor grader’s blade width is constrained by the width allowed in roadwork. However, the power and efficiency applied to the blade can be increased within practical limits.

One machine that could have been designed for higher capacity was the mechanized scraper. The limits imposed by animal power kept slip, Fresno and early wheeled scrapers small. Once tractors came into play for propulsion, things changed.

The two simplest ways for a scraper to take full advantage of a tractor’s pulling capacity were to design a larger bowl or to hitch multiple scrapers together in train. It was one thing to follow norms and just enlarge the bowl. But R. G. LeTourneau was never one to follow norms, and his concept for increasing scraper capacity was no exception.

The problem with a bigger scraper bowl was the power required to load and unload it. Width had to be kept in check for sake of transportation and resistance on the cutting edge, so it could be deeper and/or longer. The stresses of loading and then ejecting the load, especially when moving it the length of the bowl, increased the power required beyond what was needed to simply move the load.

LeTourneau’s solution was unusual. In 1923, he built the world’s first motor scraper with a gas generator powering seven electric motors. The power system would have been unable to load and eject the 12-cubic-yard payload, so he designed and patented a telescoping bowl.

The bowl consisted of five buckets, and all were nested at the front of the scraper frame to begin loading. The first bucket was loaded, and then released to move back. Each of the other bowls were loaded in sequence. Once they were all loaded, they would be aligned along the length of the frame. Ejecting the load simply reversed the process, unloading the forward bowl first and then bringing another forward inside it. The net effect was keeping the loading and unloading action in the front few feet of the scraper frame instead of needing enough power to force the load down the entire length of the frame.

LeTourneau sold the patent for this design to contractor Warren Brothers Company in January 1927. Then he reacquired it in 1935. He went on to produce a range of telescopic-bowl scrapers for both crawler tractors and his largest Tournapull prime movers. When LeTourneau reentered construction equipment manufacturing after noncompete restrictions expired following sale of his construction interests to Westinghouse Air Brake in 1954, some of his huge electric-digger electric drive scrapers used telescopic bowls.

The Historical Construction Equipment Association (HCEA) is a 501(c )3 non-profit organization dedicated to preserving the history of the construction, dredging and surface mining equipment industries. With over 3,500 members in a dozen countries, our activities include operation of National Construction Equipment Museum and archives in Bowling Green, Ohio; publication of a quarterly magazine, Equipment Echoes, from which this text is adapted, and hosting an annual working exhibition of restored construction equipment. Individual memberships are $35.00 within the USA and Canada, and $55.00 US elsewhere. Our next International Convention and Old Equipment Exposition will be September 22-24, 2023, in Bowling Green, Ohio. We seek to develop relationships in the equipment manufacturing industry, and we offer a college scholarship for engineering students. Information is available at www.hcea.net, or by calling 419-352-5616 or e-mailing info@hcea.net.

Considerations for selecting a truck body must include the equipment’s total cost of ownership.
Philippi-Hagenbuch, Inc.
August 18, 2022
Follow Us