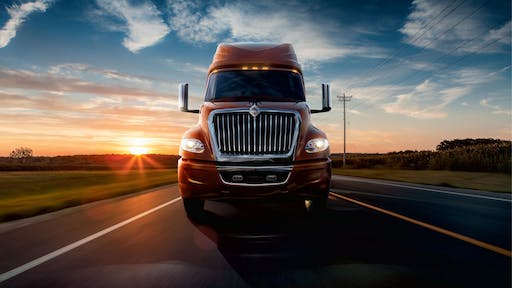 "The new International LT Series reflects our vision for the future of the trucking industry, with a host of advancements that support improved driver safety and productivity, as well as fuel efficiency and uptime," says Bill Kozek, President, Truck and Parts, Navistar. "This new vehicle reflects our strong belief that integrating the best technology will provide customers with a significant operating advantage."

In developing the LT Series, International worked hard to assure that drivers will find each vehicle more comfortable, appealing and user-friendly in every detail. In keeping with the company's DriverFirst product design focus, International undertook extensive research with truck drivers, including driver clinics that gathered input from hundreds of drivers. International used this research to design an all-new interior, and identified multiple new and improved features that enhance driver appeal.

"To ensure the new LT Series is the most driver-centric Class 8 vehicle we've ever built, we gave drivers a voice in its design," says Jeff Sass, Senior Vice President, Sales and Marketing, Navistar. "Many of our customers tell us that their number-one challenge is attracting and retaining drivers, which is why we put so much effort into understanding and responding to drivers' needs. These improvements also contribute to increased driver ease of use that will boost the vehicle's productivity."

Based on a careful review of more than 500 points where the driver and truck interact, the highly ergonomic interior of the LT Series includes better elbow room, hip room and leg room. Driver input also led to a smart, well-designed mix of high-tech and traditional features that emphasize driver ease of use.

The redesigned interior features a new premium gauge cluster with a digital driver display that places everything within comfortable reach, while offering drivers real-time monitoring of fuel economy and other important alerts in clear sight. The new display also offers up to 15 customizable digital gauges. In addition, the air horn was relocated back to its traditional, intuitive position over the driver door in response to overwhelming driver feedback.

Multiple improvements are designed for improved safety, including standard LED headlamps to improve night vision, a column-mounted gear-shifter that allows drivers to keep their eyes on the road, and a redesigned one-piece side window that affords the driver a clearer line of sight. In addition, the Bendix Wingman Advanced Collision Mitigation system comes standard in the LT Series.

The LT Series was designed with the goal of best-in-class uptime, meaning keeping the truck on the road and facilitating quick service when the need arises. To drive improved uptime, International carefully reviewed reliability data and other data collected from OnCommand Connection, the company's leading-edge remote diagnostics system, and made multiple enhancements to support increased reliability and serviceability.

"We pored over reliability data to evaluate nearly every single system on our on-highway platform, in order to look for ways to get better," says Denny Mooney, Senior Vice President, Global Product Development, Navistar. "In some cases, we completely redesigned the entire system to reach our goals. We are proud of the integrated, data-driven approach we used to assure improved reliability, serviceability and productivity."

Many of the truck's new features were designed to improve reliability and serviceability, as well as functionality. For example:

The LT Series features dramatically improved aerodynamics and provides fuel efficiency that is 7% better than the company's most recent fuel economy leader, a 2017 ProStar with the Cummins ISX15 engine.

International has always placed a strong emphasis on industry-leading aerodynamics as a solid foundation for fuel efficiency, and the LT Series delivers 3% improvement in fuel economy due to its aerodynamic benefits alone. Upgraded aerodynamic features on the new International LT Series include an aero-contoured hood, fender, wheel opening and chassis skirts and an aero-enhanced three-piece front bumper, while longer side extenders shorten the trailer gap.

Aerodynamics in the LT Series were fine-tuned using multiple advanced testing methods, including computational fluid dynamics, one-eighth scale and full-size wind tunnel and coast-down testing, to assure that the vehicle would perform well facing winds not just head-on, but also at an angle. In fact, the higher the yaw angle of the wind, the better the LT Series performs against the competition.

Central to the advances of the International LT Series are advanced driver assistance systems that support safety and efficiency goals and pave the way for additional customer-selected options.

The Bendix Wingman Advanced Collision Mitigation system comes standard with every model in the series, and is also available with the optional Bendix Wingman Fusion and Meritor WABCO OnGuard ACTIVE systems.

The sophisticated new electronic control systems also use programmable parameters to optimize efficiency. Driver controls and instrumentation are based on robust industry-standard SAE J1939 electrical architecture, with a new cluster and switches designed to keep drivers focused and maximize uptime.

The LT Series is being launched with the new 2017 Cummins X15 engine, which has horsepower ratings of up to 500 hp in the efficiency series and up to 565 hp in the performance series. It is also being launched with the new 2017 Navistar N13 engine, which will be available in the spring and has an advanced fuel-efficient 13 L design that produces up to 475 hp and 1,750 lbs.-ft. of torque from a design that is 500-600 lbs. lighter than traditional big bore engines.

The company is taking orders today and will begin production in late November.

The Tribine Harvester features four aligned low ground pressure tires to reduce soil compaction and a 1,000 bushel grain bin to eliminate the need for a grain cart and tractor to run parallel to the machine in the field.
August 31, 2016
Follow Us