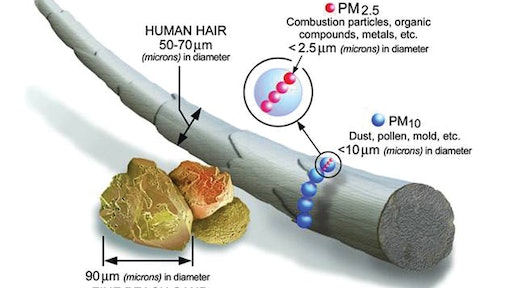 In 2005, Reaction Design, a San Diego, CA-based developer of combustion simulation software, began focusing exclusively on clean combustion. That included anything from internal combustion engines for two and four stroke engines, small engines and large diesel piston-driven engines for the on- and off-highway equipment markets.

FORTÉ’s new technology addition was inspired by the accomplishments of the Model Fuels Consortium (MFC) which was founded in 2005 by Reaction Design to help guide its clean combustion efforts. The company put together a group of fuel providers and engine companies to compile an extensive and accurate library of fuel models, and make those models practical for manufacturers’ combustion simulation needs. The success of the fuel models prompted the members to ask Reaction Design to move into phase two: to attempt to understand soot and particle effects on the atmosphere and what could be done in the engine to address the creation and expulsion of PM through the exhaust system.

In order to do that, an understanding of the chemistry involved in the creation of particulate matter is needed to reduce the event to a mathematical equation for simulation.

Health, happiness and the pursuit of clean air

“Our bodies can’t eliminate certain sizes of particles,” says Bernie Rosenthal, CEO of Reaction Design. “With vehicle exhaust, it’s easy to identify the high-polluting vehicles due to their plumes of black smoke. Those are the particles we can see, but they aren’t the ones that affect us the most.” In a diagram supplied by the EPA (see image XXXX), the size of a particulate matter’s diameter is shown with relative size comparisons. Soot particles less than 2.5µm (microns) in diameter are unable to be eliminated by the human body.

“Diesel particulate filters (DPFs) are good at removing larger particulates, but there are significant costs to maintain the technology for an off-road vehicle owner,” says Rosenthal. “A DPF is like a honeycomb with catalytic material sticking to it, and the particles stick to the catalyst on the honeycomb, essentially trapping them. As the particles are collected and accumulate on the honeycomb structure, a regeneration process is needed to heat the particles to a high enough temperature to turn them back into a gaseous state to move them through the honeycomb. Problems can arise if a vehicle has uneven load or uneven driving conditions which upsets the regularity of the regeneration process.”

Rosenthal reminds that according to the Law of Conservation of Energy, energy cannot be created nor destroyed; therefore the sum of all energies in a system must remain constant. In order to add heat to one part of a system, the energy must come from another part, which in this case would be draining power off of the engine, lowering overall productivity numbers.

Other engine and emissions system manufacturers are investigating particulate counting measurement devices to trigger the regeneration process at a certain PM concentration. This sophisticated equipment and extra hardware drives up the overall price of the system, which is not desirable by manufacturers who are already increasing vehicle prices significantly to offset engine system price increases. Test facilities can be limited in capabilities and availability when it comes to particulate matter counting and analysis. Other modeling approaches often rely on empirical data from limited test conditions and use practical limitations without chemistry process details included in the equation.

“Traditionally, we build a piece of equipment and test it extensively. Unfortunately, when we try to detect small sizes of PM, it’s not cheap, it’s not easy, it’s not easy to find places equipped to do so, and it doesn’t offer much opportunity to predict what is going to happen under various conditions because most test rigs aren’t representative of the multitude of various off-road conditions seen by vehicles,” says Rosenthal.

Particulate matter starts as a gas, which clusters to form particles. As the particles get larger, they tend to move toward the hotter center, which makes the likelihood higher for the large particles to explode into smaller particles. The small particles begin to collect and form larger particles, continuing the cycle.

The foundation of the particulate formation monitoring in the software is actually rooted in the military industry. The Department of Defense (DOD) had a research contract several years ago to model a rocket’s path based on its plume. If the source of the larger particles could be found, the site of the missile launch could be located. The Department of Energy (DOE) agreed to allow Reaction Design to commercialize the software and the company was able to become the exclusive distributor. “We had a piece of the particle tracking module that we put into one of our products to allow us to do the math of how particles are created, grow, stick together, burn up and form smaller particles again,” explains Bernie Rosenthal, CEO of Reaction Design.

The science of emissions reduction wants to go toward eliminating soot in the gas phase by removing the “sooting tendency” with each fuel type, over which engine manufacturers have less control.

Reaction Design added several soot models to its MFC Fuels Library that were validated across approximately 470 sets of different conditions. A designer can use the library to pick all of the chemistry representations of the manufacturer’s fuel choice. An engine manufacturer, for example, can emulate the fuel that will be run in the engine system. The number of liquid fuel types that are validated and can be represented in a simulation range from gasoline to diesel, natural or synthetic, and include biofuels, petroleum-derived fuels, biomass- and coal-derived fuels, as well as several fuel additives.

When an engine manufacturer or designer runs a simulation after selecting the fuel properties in the library, the soot model predicts fuel trends including the effects on the system. Using CHEMKIN-PRO, the company’s modeling software for gas-phase and surface chemistry, and CFD simulation software FORTÉ, engineers and designers can predict the particle size and density of soot. “There always seem to be more small particles than large particles,” says Rosenthal.

The predictive analysis allows a designer to see where the soot is forming, allowing them to search for answers to the critical questions, Why is this happening? and, What can I do about it? When coupled with an accurate soot chemistry mechanism, such as the one developed by the MFC, the FORTÉ soot model provides engine designers with a physics-based approach to the prediction of soot size and mass emissions trends with accuracy. The capability is still in the beta stage as it relates to the FORTÉ product, but the company hopes to this completed by the end of the year. “We’re getting good trend data, and now we’re looking to bring the accuracy to a range where it’s even clearer.”

Reaction Design is working on a program with the National Energy Technology Lab to find a coal gasification alternative which has the promise of being a cleaner way to use coal energy. "There is a lot of political pressure on the coal burning community," says Bernie Rosenthal, CEO of Reaction Design. "When we talk about coal-derived fuels, we’re talking about liquefying the coal into a diesel-kind of fuel." There are quite a few processes being evaluated in the U.S. and Canada to make those processes more cost-effective, and Reaction Design's modeling analysis may help to discover inefficiencies that can optimize the way coal-based fuels are created and utilized.

Earlier this year, the Japanese Ministry of the Environment released the results of a 2010 study of micro particulate matter of less than 2.5 micrometers in diameter (PM2.5) which showed that most of the locations that were measured, particularly those near a main roadway, had average levels of PM2.5 that exceeded the current standard of less than 15 micrograms/cubic meter.