The off-highway sector must consider new emerging economies and their infrastructure needs when determining its technological course of action for tackling new emissions challenges and regulations. 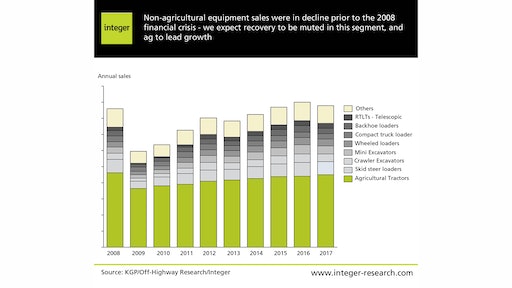 The off-highway mobile machinery market can seem extremely complex, and, to a certain degree, it is. While commercial vehicles and passenger cars are broken down into weight classes as a basis for emissions regulation, the off-highway market is classified by application including construction, agricultural, mining and forestry equipment and subsequently into powerbands. To add to the complexity, emission standards can differ for each off-highway segment.

At the start of 2014, the U.S. Environmental Protection Agency’s (EPA) Tier 4 Final and Europe’s EU Stage IV advanced emission standards were enforced in North America and Europe respectively, in an attempt to harmonize the two markets and allow OEMs to sell the same equipment in each region.

Harmonization was a key aim of both European and North American emissions policy makers, but the most recent developments are threatening this process and adding an extra layer of complexity to the market. Though the U.S. EPA does not have any announced plans to roll-out new legislation, on the other side of the Atlantic, European discussions on the implementation of both particulate number and a new emissions standard named Stage V are ongoing. This new emissions standard could be rolled out between 2019 and 2021 and would put North America behind European emissions standards, side-tracking the harmonization process.

While Stage IV decreased NOx emissions levels by 90% compared to Stage IIIB, new Stage V legislation under discussion would further decrease NOx emissions by 37%, particulate matter by 40% and also include a particulate number standard. The new particulate number legislation would ensure the use of wall-flow diesel particulate filters (DPFs) as demonstrated by Euro VI configurations currently being rolled out in the truck segment in Europe where particle number limits now apply. Experience gained there will be built upon to ensure optimized aftertreatment system configurations in the off-highway sector. Stage V’s equipment scope will be expanded to include small hand-held equipment as well as specialized vehicles such as snow scooters, providing a comprehensive emission ruling for a greater range of equipment, from very small units to large gensets. At Integer Research, we believe that Stage V would prompt increased application of selective catalytic reduction (SCR) equipment below 75 kW. SCR is already widely used above 56 kW and in almost all cases above 75 kW.

North America will most likely not stay behind for long and it is expected that European-like Stage V regulations will also be implemented in North America in the next 10 years.

But while emissions standards drive the roll-out of ever more advanced machinery, economic conditions drive the overall market. From a total equipment fleet perspective, Integer Research forecasts the Indian and Chinese off-highway markets will both overtake Europe and North America by 2015. This rapid increase in demand for off-highway equipment in both China and India is driven by both countries’ expanding economies, which will fuel the need for additional and more efficient machinery. India and China are set to expand towards 6.5 and 8.0 million units of off-highway machinery in use by 2023, while the equipment parc in Europe and North America will remain more stable at around 4.5 million units.

Even though the North American and European fleets might not expand much in size and may be overtaken by growing economies like India and China, equipment replacement schedules are shorter resulting in lower average equipment age and more advanced technology in use. Many of these advancements are driven by increasingly stringent emissions legislation.

In order to avoid the use of exhaust aftertreatment technology in their machinery, some OEMs are researching the applicability of alternative fuels such as natural gas, biofuel and electrification. Natural gas is one of the most discussed options for North America in light of recent fracking discoveries freeing up abundant and as yet untapped natural gas reserves. However, the scope for use of compressed natural gas (CNG) and liquefied natural gas (LNG) in off-highway equipment might be limited. This is because the fuel tank size as well as the additional weight added to the equipment would make it very heavy and cumbersome to operate. Similarly, LNG is mainly used in applications that run almost continuously, which makes it unsuitable for most off-highway machinery. As a result, in most cases we do not see diesel technology being substituted by alternatives in the off-highway sector, although some applications such as forklift trucks are notable exceptions.

Far more promising are technological advances such as the use of GPS, enabling farmers to more accurately plot the most efficient harvesting route, lighter alloys to reduce overall weight and therefore fuel consumption, and more efficient catalysts used in aftertreatment systems.

With diesel here to stay, the off-highway sector has to employ aftertreatment technology to reduce toxic NOx gas emissions. Currently, almost all OEMs have opted to either use pure-SCR or exhaust gas recirculation (EGR)/SCR combination technologies in equipment above 56 kW adhering to Tier 4 Interim and Final regulations in North America.

It has to be noted that SCR technology is not the only technology available to reduce harmful emissions, yet out of all the NOx reduction technologies available, SCR has proven to be the most efficient and versatile and is used by almost all OEMs. EGR technology is used in combination with SCR, but for a time it was used as a stand-alone aftertreatment option. However, as emissions levels were further restricted, EGR was combined with SCR and, in some applications, replaced by SCR given fuel economy savings to the customer compared to EGR, which incurs a fuel penalty instead. Other competing technologies with SCR include lean NOx-trap (LNT) and homogeneous charge compression ignition (HCCI), but these remain unpopular due to higher costs, potential for deactivation by sulphur in diesel, or limited operational application.

Our recent investigation into the implementation and roll-out of Tier 4/Stage IV Interim and Final advanced aftertreatment equipment in North America and Europe has revealed several challenges for the secondary market for off-highway equipment. One issue focuses on the need for diesel exhaust fluid (DEF) when shipping Tier 4/Stage IV machinery outside North America to less regulated markets. DEF, also called AdBlue, is a colorless aqueous urea solution made up of ultra-pure urea and de-ionized water and provides the ammonia needed by the SCR system in order to reduce NOx to nitrogen and water vapor. DEF can be hard to come by in regions where there are no advanced emissions standards and as such do not have an existing infrastructure.

In these cases, some OEMs provide DEF from local OEM stores, but this depends heavily on the OEM in question. Several new countries such as Argentina, Colombia and Chile are slowly witnessing an increase in second-hand advanced-aftertreatment equipped machinery and therefore an increase in available DEF.

Another challenge presents itself in the availability of diesel fuel at the level of quality required to operate these complex aftertreatment systems. In this case, some OEMs have decided to remove the aftertreatment system and set their machines back to Tier 3, in which case there is no need for ultra-low sulphur diesel (ULSD) or DEF.

Consumption growth is seen accelerating from 2017 as flexibility schemes come to an end. Europe and North America will continue to be the largest markets for DEF in this segment, with the BRIC countries slowly gaining traction, starting around 2020. North America and Europe are expected to account for 78% of the DEF market by 2023. The market for DEF could also be growing rapidly in China by 2023, depending on the implementation of Tier 4 equivalent legislation.

DEF is, however, not the only source of ammonia for SCR technology. Other ammonia sources do exist such as solid ammonia cartridges. Alternative technologies, however, have not yet been able to compete with DEF on a cost and safety basis. DEF has already been widely adopted in the diesel truck and passenger car industries across North America, and as such, an efficient infrastructure and supply chain already exist.

Integer Research sees the North American market gradually replacing older equipment in favor of Tier 4 machinery in time. DEF, which is already widely used in the region and widely available, will start gaining ground in the off-highway market as more advanced equipment comes online. This can bring about both opportunities and risks. The customer will need to be educated on the need for quality-certified DEF in order to prevent equipment damage. While Europe and North America will see the gradual renewal of their off-highway fleets, countries such as Brazil and China are expected to have off-highway equipment markets growing at exponential rates. There are still plenty of opportunities and challenges in the off-highway market from both a complexity as well as sheer volume perspective.

This article is based on findings and forecasts from Integer Research’s focus report: ‘Emissions Control in Non-Road Mobile Machinery (NRMM) Markets.’ This in-depth report delves into the off-highway market to provide essential insights into what drives diesel emissions control in off-highway equipment. It is the only report to provide such comprehensive analysis of the market, past, current and future, and includes a thorough analysis of Stage IV/Tier 4 strategies and emissions control technology forecasts. For more information about this report, please email publications@integer-research.com.

Integer Research is a specialist provider of research, data, analysis and consultancy services in the emissions control market, and runs six conferences each year around the world on related topics.

Dr. Tholen is a consultant within Integer’s Automotive/Emissions sector. Since joining Integer, he has led a number of emissions-related consultancy projects and contributed to several publications including ‘Emissions Control in Non-Road Mobile Machinery (NRMM) Markets.’ He manages Integer’s discoverDEF.com website. Tholen has a Ph.D. in Chemistry from Imperial College, London.