A balanced combustion process, improved fluid dynamics and increased displacement bring a natural gas engine’s performance up to that of its diesel equivalent. 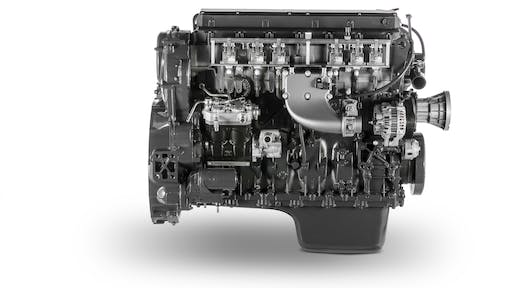 In the pursuit of environmental sustainability for an engine manufacturer, there are certain truths:

1)     An engine can never be truly clean if it does not use a clean fuel.

2)     The clean fuel should come from a renewable resource.

“Carbon dioxide reduction is important for us,” says Oscar Baroncelli, Product Manager for FPT. “While NOx and particulate matter reductions are regional, carbon dioxide is a matter of the world. It’s a global gas that has an effect on the warming of the Earth.”

In 1995, FPT Industrial began development of its stoichiometric combustion technology, relying on balanced air and fuel ratios to control CO2 production (simply stated, the higher the hydrogen-to-carbon ratio, the less CO2 that is produced.) By 1997, FPT began the mass production of CNG engines for on-road applications. “We launched our medium-duty NEF 6 and heavy-duty Cursor 8 natural gas engines in 2004, and the F1C natural gas engine for light vehicles in 2006,” says Baroncelli.

“Our OEM customers were asking for a solution to replace their existing diesel engines with a natural gas engine while getting the same performance in power and torque without impacting fuel efficiency,” says Baroncelli. In order to achieve a higher torque and power output than the Cursor 8 CNG, “we had to increase the displacement, improve the fluid dynamics, and create a more efficient combustion process.”

The technology of the Cursor 9 CNG

To comply with Euro VI, the Cursor 9 CNG does not need exhaust gas recirculation (EGR) or selective catalytic reduction (SCR), but relies on a simple three-way catalyst—a compact catalytic converter located at the end of the exhaust with an integrated structure plated with three precious metals. Platinum and palladium convert carbon monoxide (CO) and hydrocarbon (HC) into carbon dioxide (CO2) and water (H2O), while rodium converts oxides of nitrogen (NOx) into nitrogen gas (N2).

FPT’s natural gas technology is compatible with several fuel types including CNG, LNG and bio-methane. If bio-methane gas is used to fuel the CNG engine, CO2 emissions can be reduced to 0%.

Compared to the Cursor 9 diesel, the CNG model has a Ni-Resist cast-iron exhaust manifold and water-cooled wastegate turbocharger for increased reliability. A diesel engine is approximately 500 C (932 F) outside of the turbo, whereas natural gas is closer to 700 C (1,292 F). In order to keep the temperature down, EGR can be used, but FPT’s solution was to design the exhaust manifold, turbocharger and cylinder heads with a new material. “It was a huge investment on material,” says Baroncelli, “but we didn’t have to tradeoff on engine performance.”

To increase driver comfort and thus performance of the final product, the Cursor 9 CNG will be the first alternatively fueled heavy-duty engine that can be coupled to an automated robotized transmission. “The issue with coupling natural gas engines to robotized transmissions is due to the fact that the combustion strategy on the CNG engine is difficult to match during gear shifting,” explains Baroncelli. “We developed the combustion technology in house and are patenting it. The technology allows us to be the first in the market capable of coupling a CNG engine to a robotized transmission, providing fuel savings over a commonly used hydrostatic system.”

FPT Industrial’s CNG engine launch comes at the heels of a foreseen increase in demand for natural gas engines in the truck and bus market over the next several years. “Based on the global impact of sustainability, and the fact that our customers are looking for a reduction in total cost of ownership—which natural gas can provide because of lower fuel costs and the comparably higher cost of a diesel hybrid machine—the natural gas market is expected to grow significantly in North America, with slight growth in the Asia Pacific region and stability in Europe and Latin America,” says Baroncelli. “Today, the penetration of the natural gas market is 4% of the diesel market. By 2020, we at FPT expect that number to be closer to 8%.”