The Silent Pack version of the Hatz 4H50TIC reduces noise output by 4 decibels, and is 60% quieter than the Open Power Unit version. 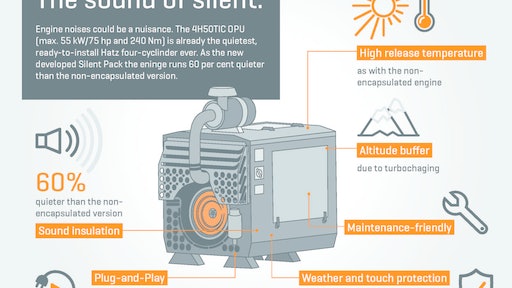 Powerful, but gentle – this is demonstrated by Hatz and its four-cylinder diesel engine from the H-Series with the newly developed Silent Pack. The state of the art Hatz 4H50TIC diesel unit performs up to 55 kW at a maximum torque of 240 Nm and complies with all current norms and requirements, such as EU Stage IIIB or US EPA Tier 4 Final. In connection with the insulation, specially developed for this engine, the Hatz 4H50TIC Silent Pack reaches a reduction of the noise emission by 4 db despite the cooler fan. Therefore the engine is 60% less noisy compared to the non-capsulated Open Power Unit (OPU).

The liquid-cooled diesel engines of the Hatz H-Series are the more compact, lightweight and economical engines of their class. All the advantages of the non-capsulated Hatz four-cylinder diesel engine are the same for the insulated Hatz 4H50TIC with Silent Pack. During the development of the Silent Pack version it was very important for the engineers to keep the installation dimensions as small as possible and to keep the engine access for example for maintenance work. There is also a special flexibility for world-wide operation. The high release temperature is identical to the non-capsulated version and the turbo charging gives enough buffer for applications in altitudes.

The sound insulation of the Hatz 4H50TIC Silent Pack is also an efficient weather and contact protection. So this engine may also be operated in a machine where the diesel unit is open fitted.

The Hatz Open Power Unit (OPU) plug-and-play solution, which is also the base for the Hatz 4H50TIC Silent Pack, is ideal for equipment manufacturers who need complete ready to install engines. The main application areas are for example hydraulic lifts, hydraulic power units, forestry machinery, drilling rigs and stationary applications such as pumps and generators. Due to the integrated and optimized specification of radiator, tubing and wiring of electronics, the Hatz OPU concept provides a tremendous ease of installation.

Value for money, silent and retrofit

The Hatz plug-and-play 4H50TIC Silent Pack is a system which is reasonably priced and tested by the engine manufacturer sold by the Hatz sales and service network in 120 countries worldwide. In addition to the complete package, Hatz also offers the Silent Pack as retrofit.