Emissions around the world

Emissions regulations have expanded beyond the EU Stage and EPA Tier regulations as countries such as China and Brazil look toward air quality standards. 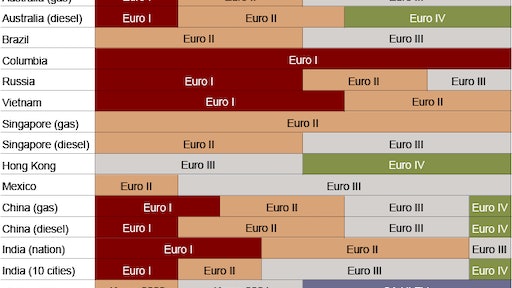 The study will highlight the unforeseen consequences created by the regulatory process put in place back in 1990. What effect will emission regulations have on used construction equipment following the Tier 4 Final regulations?

The study is designed to answer the questions:

OEM Off-Highway will have the exclusive answers to these questions as the study unfolds, and will keep you posted on its progress.

The established regulations for the U.S. were not the only emissions standards put in place. The European Union's Stage levels loosely coincided with the U.S. Tier regulations, and other countries such as China and Brazil have made efforts to implement emission reduction plans.

China III (equivalent to Euro III) was implemented in January 2008, applying to all heavy-duty trucks. The next step, China IV, was supposed to follow in January 2010 for new vehicle types and one year later in January 2011 for all vehicles. By last January it became clear that the legislation had to be delayed.

Delays in the implementation of emissions legislation are not unique to China. The other three BRIC countries Brazil, Russia and India have all seen similar delays. The reason for the delay in each case is a recurring theme: the lack of low sulphur fuel. The successful implementation of advanced diesel aftertreatment technologies relies on the availability of low sulphur diesel.

Besides a lack of an ULSD distribution network, what other challenges will OEMs face for global emission reduction technology development, implementation and worldwide distribution acceptance?