The number of high-horsepower high-efficiency tractors has grown to help farmers increase productivity. 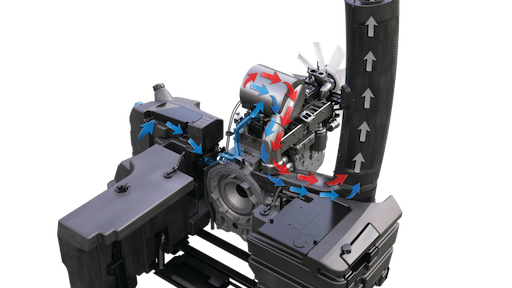 To meet Tier 4 emissions regulations, the Massey Ferguson 7600 Series uses a combination of DOC and SCR which helps ensure even the smallest particulates are removed.

Farmers want more productive machines that won’t cost them an arm and a leg to operate. At the same time, vehicle manufacturers have to ensure their products meet stringent emissions regulations. In 2014, Tier 4 Final standards go into effect, calling for a 90% reduction in particulate matter and nitrogen oxides (NOx).

Combining power, efficiency and emissions compliance has been a challenge for many companies. However, manufacturers have found ways to bring these features into the machine to allow farmers to be more productive.

According to Case IH, Racine, WI, because exhaust is treated post-combustion with SCR, the engine is able to run at peak performance. Treating the exhaust post-combustion also allows fuel to burn more completely and lowers the need for cooling during high-horsepower applications. Research has also shown that SCR systems can provide 3% to 5% fuel savings, further adding to its efficiency benefits.

Customers are, of course, the most important aspect to keep in mind when designing a piece of agricultural equipment. While the economic benefits of creating an efficiently running system are obvious, the ease with which operators can do their job is equally important. This is why just as much development has gone into tractor cabs as the rest of the vehicle. Many are becoming offices right there in the field.

Ergonomics have played an important role in cab design. Having the most frequently used controls at an operator’s fingertips makes work easier and more comfortable. There’s no longer a need to reach far across a console to find the right button to push, eliminating confusion and neck strain.

In early 2011, Case IH introduced the Steiger 600 tractor, said to be the highest horsepower and most fuel-efficient tractor to date. This tractor is designed to offer users the power necessary to get their work done quickly and efficiently, while also meeting the most current emissions regulations.

Operator efficiency was another goal for the Steiger 600 design. The large tractor cab features a wide viewing window for maximum visibility and four post cab suspension for stability in any working condition. To be more ergonomic, many of the tractor’s controls have been placed on the upper right-hand side of the cab. More frequently used controls are contained in a MultiControl armrest console on the tractor seat, allowing the vehicle operator to have everything within easy reach.

Designed to increase operator productivity, Oxbo Intl. Corp., Lynden, WA, developed the Oxbo 4334 self-propelled merger. A Tier 3-compliant John Deere 250 hp engine allows the merger to move at a rate of 30 mph. For easier maneuverability when changing locations, the pickup heads fold to a 10-ft. width in under 20 seconds.

Front mounted heads on the merger enable the machine to move around easier, especially in small fields, around corners and at headlands. The heads are also designed so as not to run over crops, allowing farmers to get as much usable product out of their fields as possible.

Part of what enables the crop protection is the user’s ability to stop the conveyor while still running the pickup heads. Oxbo’s continuous pickup and crop flow technology also helps protect crops by enabling gentler handling of crops and allowing fewer rocks to get into the windrows.

Further enhancing productivity is the full view operators get out the window of the cab. Through the window, the entire 34-ft. continuous pickup can be seen so operators will have better control and be able to build better windrows. Oxbo updated the vehicle controls by placing fingertip controls on a joystick easily within reach. The controls allow users to raise, lower, fold and unfold heads quickly and easily.

The Massey Ferguson 7600 Series high-horsepower row crop tractors were also introduced in 2011 by AGCO Corp., Duluth, GA. Featuring four models available in a power range of 170 to 225 hp, AGCO developed the 7600 Series based on feedback from its customers. Barry O’Shea, Manager of Product Management, says that about five years ago the company began using voice-of-customer to design products that would best fit its customers’ needs. For the 7600 Series, AGCO compiled a list of customer suggestions, chose the ones it felt would make the biggest impact, and paired those changes with the necessary developments to meet Tier 4 regulations.

An AGCO POWER diesel engine equipped with an e3 SCR helps the tractor comply with Tier 4 interim emissions regulations. The SCR is paired with a diesel oxidation catalyst (DOC), enabling disposal of smaller particulates. This creates a better mix of urea in the exhaust gases, says O’Shea, which leads to using less SCR for better efficiency.

AGCO’s SCR design doesn’t require additional valves, turbochargers or cooling packages, which eliminates the need to redesign existing engines. It also allows for a smaller cooling package, which was important to the design of the tractor.

O’Shea says ensuring visibility in the front of the tractor was one of the key goals during development. Cooling packages used in Tier 4 systems tend to generate a lot of heat, he says, but the company didn’t want to make the front of the tractor bigger because that would impair visibility. “Visibility is so important,” says O’Shea. “And more people are using front mounted equipment on these tractors.” Through a special cooling package design and the use of a steel hood for a slimmer appearance, AGCO was able to decrease hood space.

The 7600 Series tractor offers buyers the option of a Dyna-6 (24-speed, partial-powershift) transmission or a Dyna-VT, which is a continuously variable transmission (CVT). Previously, customers had to choose between two different tractor models if they wanted one transmission versus the other. However, many of the company’s customers utilize vehicles with both types of transmissions in their businesses, and it was important that a driver be able to go from one machine to the next without having to learn a whole new system, says O’Shea. To address this, AGCO designed a common interface for the 7600 Series so its customers wouldn’t have to give up features they wanted just because of the transmission they needed to get their work done.

Better fuel efficiency is one of the benefits operators get with the Dyna-VT. Often times, if a tractor reaches a difficult spot in a field, such as a hill, the transmission will adjust the rpms from 1,800 to 1,700 in order to make it through the rougher terrain, then go back up to 1,800. However, this can have a negative effect on fuel efficiency. The CVT transmission allows you to set the tractor when it’s going down the field, says O’Shea. When it reaches a tough spot, the CVT goes from 5 mph to 4.9 mph, then down to 4.8 mph and 4.7 mph; once the tractor has made it through the rough spot, the transmission adjusts the speed back up to 5 mph. “The engine is sitting in a constant load position,” says O’Shea, “[and] the operator can set that where you have the most power and best fuel efficiency, and the transmission will do the shifting on its own.” Even if a driver is unfamiliar with an engine’s capabilities, O’Shea notes that the transmission has a mode which automatically sets the engine rpms to get optimal performance and efficiency.

Along with ensuring visibility and designing a common transmission interface, the company made the vehicle controls more ergonomic. Two levels of operating packs are available with the tractors; one has a simple interface while the other places all of the controls in one location, a Multipad controller. Built into the right-hand armrest of the cab’s seat, the Multipad controller holds all of the vehicle controls, such as forward, reverse and hitch movements. “You can rev the engine up and down; you can start and stop the PTO,” says O’Shea. “You can do all this without removing your hand from the lever.”

Next to the Multipad controller is a joystick for the tractor’s loader control, which was made larger based on customer suggestions. “When you have big gloves on, especially in colder climates, it is hard to use a joystick,” says O’Shea. Buttons were also added to the joystick so vehicle operators would be able to better control the tractor’s loader.

Demand continued to be down from domestic and international markets, reports SMMT.
August 28, 2020

Hundreds of the most up-to-date engine specs for the on- and off-highway equipment markets.
August 24, 2020

Inclusion of a specialized drive system and Caterpillar engine enables the vehicle to easily maneuver over difficult terrain while carrying up to eight passengers or payload of 2,200 lbs.
Sara Jensen
August 20, 2020

The new air filters protect fuel cells from harmful gases and particles, ensuring operation of the fuel cell over the entire service life of a vehicle.
MAHLE Powertrain
August 19, 2020

UK Engine Manufacturing Declines in First Half of 2020

Navistar has selected Cummins as the preferred supplier of medium- and heavy-duty engines for its trucks and buses in the U.S. and Canada.
Cummins Inc.
August 10, 2020