It takes a village to eliminate a DPF

Tier 4 Final emissions regulations are able to be achieved without a DPF through cooled EGR. 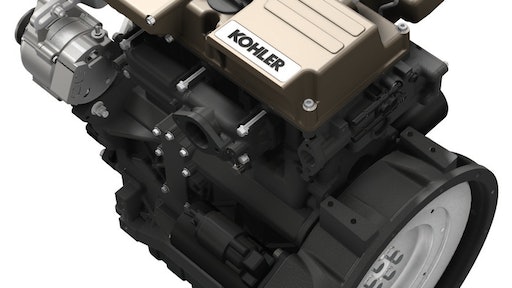 At first, Kohler Engines thought the easiest way to meet Tier 4 Final emissions regulations for its new diesel engine line would be to adopt the proven diesel particulate filter (DPF) aftertreatment device, said Giuseppe Duri, Director of Engineering for Lombardini, a Kohler Company during the product’s release event. After research, Kohler found the DPF to not be the best solution for end-users and its OEM customers because of the known inconveniences such as clogging and the negative fuel economy due to the regeneration process. The heat generated from the burn process has to be shielded or ventilated, on top of the added weight and space a bulky DPF causes. Kohler decided it best to take a blank slate design approach and find its own unique solution.

Achieving the emissions requirements without the use of a DPF was possible through optimizing the engine’s other components, including its direct injection system, cooled exhaust gas recirculation (EGR) and diesel oxidation catalyst (DOC).

“The main benefit to not having a DPF is the fuel savings. You need to inject diesel fuel into the DPF to clean it, and the regeneration process depending on the engine’s duty cycle could be quite often. So, you can have as much as a 5% increase in fuel consumption compared to an engine that doesn’t have a DPF,” says Jeff Wilke, Associate Product Manager at Kohler.

“The fact that we’ve gone to the electronic common rail direct injection fuel injection system also makes it more efficient. When our engine is compared with an indirect fuel injection engine, we’re seeing savings of 16%, including the 5% DPF savings.”

The high pressure common rail direct injection system is controlled by the electronic control unit (ECU). The engine’s mapping program within the ECU monitors and manages the engine’s power output in varying conditions by injecting fuel multiple times into the combustion cycle to maximize torque and power when needed most.

Fuel can be injected up to six times per engine cycle, though not all six injections are used every time. The number of injections depends primarily on the engine’s need for power, the load and to control the combustion cycle. “The multiple injections give us more power and control over the combustion process. We’re able to inject fuel during the power stroke and get more torque out of the engine,” Wilke explains.

Also, the direct injection system offers equipment owners the ability to save up to $1,400 on fuel and $116 on oil per year when compared to indirect injection diesel engines with DPFs and based on 1,000 hours of annual operation at $3.75/gallon of diesel fuel and $4.10/quart of oil.

The combustion chamber’s unique shape, cooled EGR, turbocharger and the overall engine design work together to control oil consumption. “If you consume oil in the engine, it contributes to particulate output,” says Wilkes.

Kohler’s own cooled EGR system cools in two stages. The first stage cools through the water jacket in the cylinder head. State two is a heat exchanger located above the intake manifold in the engine. This two step approach to cool the charge down also helps to make a smaller, cleaner engine package. “We don’t have to have as large of an EGR or heat exchanger to cool that air charge down to go back into the engine,” Wilke says.

With Tier regulations and aftertreatment add-ons, there are a lot of changes for the OEM as far as the fit of the engine in the application. Because the engine does have a DPF and is able to reduce the overall size of the EGR package, the engine fits where the previous engines fit.

A rigid base structure strengthens the overall system with an engineered webbing design that goes across the width of the engine. The cross-member pattern gives the engine rigidity and strength, and helps to absorb noise and vibration that occurs from the general running of a diesel engine. “It gives us a very strong lower end to support the crankshaft,” Wilke says.

The gear train system engages multiple teeth at one time, also helping to lower overall noise. With the large European reach of the company, and the stringent noise emissions regulations there, Kohler took it upon itself to do a lot of noise studies on engine covers to deaden any vibrations that were occurring in places where the cover was too thin, for example.

“One of the big elements that reduced the engine noise was the electronic controlled fuel injection system,” Wilke says. “With that system, we are able to control the combustion system better so you don’t get the pre-ignition diesel knocking noise.”

By creating an engine system without a DPF that is able to meet Tier 4 Final emissions, as well as optimizing the fuel injection system, combustion chamber and cooled EGR system, Kohler Engines was able to lower the total cost of ownership, reduce maintenance intervals and lessen heat management issues. Its compact size makes engine integration easier for existing and new equipment designs, and lower NVH means operator safety and comfort are still met and recognized. 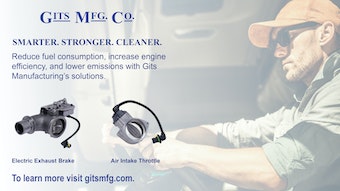