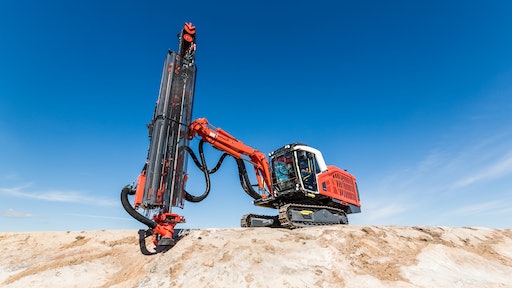 Sandvik’s Ranger DX900i and DX800i top hammer surface drilling rigs are designed to provide a rational approach to operational output with high levels of automation. They build on the global success of previous models in the Ranger line but have been redesigned to offer the latest technological advancements and optimal performance. The DXi models have a 290-degree rotating superstructure which provides a 55 m2 drilling coverage area, a new rock drill, a new silent ‘iCab’ cabin and the ability for wireless transfer of data.

“Our new Ranger DXi models have been created to provide an intelligent method of working that allows customers to get the best performance out of their machines for a high level of jobsite productivity,” says Jarno Viitaniemi, Product Manager at Sandvik Mining and Rock Technology. “The DX900i is the most powerful rig in its class, providing the largest coverage. And the new models are designed to make rock drilling easier and more comfortable for operators.”

Sandvik was founded in Sweden in 1862 and is now a global engineering company. The Ranger DXi models are used in limestone and aggregate production, for mining and some production drilling, and for infrastructure and road construction. To prepare for operation, a drilling plan stored via software on a laptop/PC and is transferred wirelessly to the machine. Automatic features enhance the volume of holes being drilled, with size and distance being set on the drilling pattern; the ‘iTorque’ system compensates for difficult rock. Drilling data is stored, and the operator can add extra notes. Automation optimizes performance and reduces wasted time and costs; and a remote control enables the operator to use the machine in challenging conditions.

Sandvik has been working with Volvo Penta for more than 10 years and requested help in prototyping the new Ranger DXi models in 2014; the machines were launched in 2017 and have sold particularly well in northern Europe, the U.S., Canada, and Russia. The machines are used in climates ranging from -30-55 C, and when used in shift patterns, they may be used for up to 20 hours per day. Due to this, Volvo Penta’s 8-L engines have to be robust and reliable.

“The engines have proven to provide low fuel consumption and low noise,” adds Viitaniemi. “In the Nordic countries especially, Volvo Penta has good reputation and customers have been happy about us using their engines in our Ranger DXi machines. They have also been a flexible partner and given us quick answers to any technical questions.”

Volvo Penta’s TAD852VE and TAD872VE are installed in the Ranger DX900i; and the TAD851VE and TAD871VE are used in the Ranger DX800i. Each model is an off-road, 6-cylinder engine featuring common-rail fuel injection, overhead camshaft and turbo. The TAD851VE and TAD871VE have a power output of 185 kW; while the TAD852VE and TAD872VE provide power of 210 kW. Optimized Selective Catalytic Reduction (SCR) technology and a light cooled exhaust gas recirculation (EGR) contribute to efficient combustion.

“We have been working with Sandvik for many years now and they have received good customer feedback on other machines with our engines in terms of the provision of an excellent power response, low fuel consumption and low engine noise, and so they decided to use our 8-L engines in the new Ranger DXi series,” says Pasi Järvelä, Area Sales Manager Finland, at Volvo Penta. “In addition, we’ve given strong support during the research and development phase, and have good co-operation between out companies at all levels. We look forward to continuing a strong relationship with Sandvik in future.”

Volvo Penta will present its full range of EU Stage V solutions at Intermat, including D5, D8, D11, D13 and D16. Each solution features a high-performance engine and perfectly matched exhaust aftertreatment system (EATS), to comply with the next EU emissions level. The company’s Stage V range is optimized for tomorrow and keeps the highest focus on maximized uptime and fuel efficiency, along with ease of installation, operation and maintenance. The range offers power from 105-565 kW (143-770 hp).

Volvo Penta will be at the Pre-Intermat media networking event in Paris from January 18-19, and at the Intermat trade show, from April 23-28.