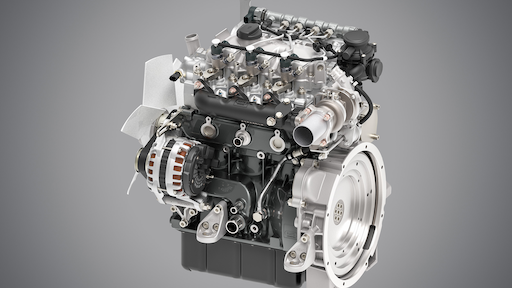 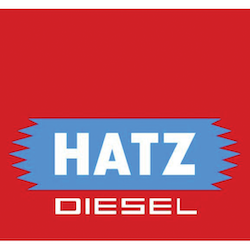 Motorenfabrik Hatz introduces its new liquid-cooled three-cylinder diesel 3H50T in the Fan-to-Flywheel version, as well as in the OPU (Open Power Unit) variant.

The new engine model in the performance class under 19 kW extends the product range of H-series engines that were specially developed by Hatz for current and future requirements on power, performance, reliability and international exhaust gas standards. With a displacement of only 1.5 L and a maximum output of 130 Nm the Hatz 3H50T is the engine with the highest torque in its class in the market today.

The Hatz 3H50T achieves its output without an intercooler. Its very compact construction without diesel particulate filter (DPF) gives significant benefits particularly for use in compact machines. With its low weight and small installation dimension the performance data of the engine even exceeds many older engines in the 19-37 kW class. This gives many machine manufacturers an outstanding alternative for planning their compact machines with small engine compartments and for reasonably upgrading existing machines to EU Stage V – with simultaneous safeguarding of previous investments in design and development.

The new Hatz 3H50T engine satisfies current and future emission regulations, also including EU Stage V as well as EPA Tier 4 Final. Due to its modern design and construction the engine achieves the specified values even without an additional diesel particulate filter (DPF). This predestines the engine for compact machines with restricted space conditions in which a diesel particulate filter is not possible, for example. The Hatz 3H50T achieves an extremely low particle mass that also undercuts the limit value by a factor of 10 without any further exhaust emission after-treatment such as exhaust gas recirculation or diesel oxidation catalyst, for EU Stage V this is 0.4 grams per kilowatt hour.

The Hatz 3H50T OPU is a plug and play solution that is the ideal choice particularly for manufacturers of compact machines that need engines fully ready for installation. Major examples of use include lifting platforms, hydraulic systems, drilling machines and stationary applications such as pumps and alternators. With its integrated and optimal design of the radiator, hoses and cabling as well as the electronics, the Hatz OPU concept greatly simplifies design and installation.

During development of the 3H50T, Hatz consistently followed the H-series engine strategy of rightsizing that incorporates state-of-the-art materials and technologies such as turbochargers and the Bosch common rail system (off-highway version). The result are compact and robust engines that feature high torque at low speed.

Operations will resume with extended safety measures to protect the health of the workforce.
DEUTZ Corporation
April 20, 2020

The dual-fuel 4HV1 engines and power units can operate on natural gas or liquid propane depending on the fuel source available without reconfiguring the base engine.
Isuzu Motors America (Powertrain Division)
March 20, 2020

At CONEXPO 2020, Caterpillar is showcasing its latest engine technologies which includes a hybrid engine concept which captures surplus energy through a parallel hybrid system and reuses it when needed.
Caterpillar Inc. - Industrial Engines & Power Systems
March 12, 2020

Kubota enters the 300 hp market with its S7509 engine which provides 100% power take-off at the flywheel and fan side.
Kubota Engine America Corp.
March 9, 2020

The company will also provide demonstrations of a mid-sized unmanned ground vehicle built by ARGO XTV which was the first application in which the Vanguard battery pack was used.
Briggs & Stratton Commercial Power
March 6, 2020