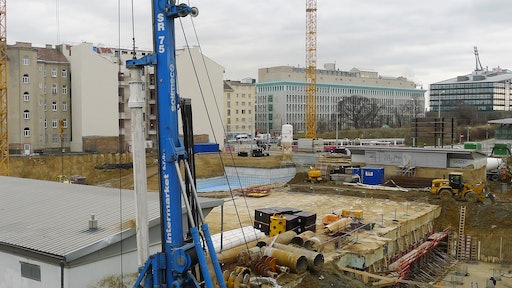 Following a successful outcome of equipping its SR-75 piling rig with Volvo Penta’s EU Stage IIIA and Stage IV engines, Soilmec has selected the Swedish company’s D13 Stage V solution for future production. The change comes ahead of the new emissions regulations coming into force in 2019.

“Volvo Penta’s engines are compact and versatile, and offer high power with low fuel consumption,” says Alessandro Ditillo, Large Diameter Bored Piles Product Line Manager at Soilmec. “We found that their Stage IIIA and Stage IV engines have had the great advantage of having the same mechanical configuration and a single interface on the electrical panel. Together with a substantially reduced lead time, this has allowed Soilmec to easily manage the production of our models and send them to customer’s required final destination.”

He adds, “We have had great feedback on the SR-75 with Volvo Penta engines and their brand is well recognized by the market and known for providing an excellent and global after-sales service. For all of these reasons, we have chosen Volvo Penta’s Stage V engine solution for the SR-75 in future.”

Soilmec, based in Cesena, eastern Italy, was founded in 1969 and supplies its equipment to customers across the world. Its parent company, Trevi Group, has carried out engineering work on large projects such as New York’s Ground Zero, using Soilmec’s machinery.

The SR-75 is an advanced self-mounting hydraulic drilling rig that is designed for creating bore holes for foundation piles, for either residential or commercial properties. The unit can create holes of various diameters and depths, including cased bore piles driven by a rotary head or casing oscillator, or uncased bore piles that are stabilized by drilling fluid or left dry.

Its main markets are Europe and Middle East. The 70-ton unit forms part of Soilmec’s series of piling rigs that range from 30-170 tons; the series of units can create holes of between 300-3,500 mm in diameter, and of depths up to 140 m.

“We have had a great overall experience with Volvo Penta,” says Ditillo. “From the initial phase of the study, to the application of the engine on the SR-75, and through to the on-site commissioning and after-sales management, the availability of Volvo Penta technicians has always been total. They have been proactive in solving any issues, and so the relationship has really been very positive.”

Strategy for the future with Stage V

Volvo Penta’s D13 Stage V engine solution is part of the full range of models from D5-D16, that provide power from 105-565 kW (143-770 hp). Volvo Penta’s Stage V engines are compact, with hardware layout and electrical interfaces that are compatible with engines of earlier emissions legislation. They are designed to deliver maximum power and torque at low rpm. This results in optimized performance, including smooth operation, low noise, world-class fuel efficiency as well as lower exhaust gas temperature.

“Soilmec is a relatively new customer for us, but we’ve established a good relationship quickly,” says Renato Deda, Sales Manager at Volvo Penta. “We’ve worked with them through the development process of the SR-75 and it’s satisfying to know that the excellent response they’ve had to our engines in their machinery has led them to select our 13-L Stage V solution for the future.”

Volvo Penta will be at the Pre-Intermat media networking event in Paris from January 18-19, and at the Intermat trade show, from April 23-28.