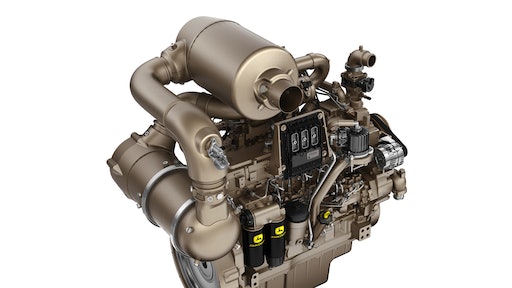 For engines 56 kW (75 hp) and above, the Integrated Emissions Control system will consist of a diesel oxidation catalyst (DOC), a diesel particulate filter (DPF) and a selective catalytic reduction (SCR) system specifically designed to meet the demands of off-highway applications. The DOC/DPF exhaust filter reduces PM while cooled EGR and the optimized SCR system reduce NOx to the regulatory levels of Tier 4 Final/Stage IV.

“From the onset of emissions regulations, John Deere has focused on incorporating emissions-reduction technologies that meet applicable regulations while maintaining or improving performance,” says John Piasecki, director of worldwide marketing, sales and customer support for John Deere Power Systems. “SCR is an appropriate technology building block for Tier 4 Final/Stage IV, now that it is more mature for off-highway applications, the DEF supply chain infrastructure is better developed, and John Deere has optimized the performance of our SCR system.”

John Deere attained a world-class fuel economy position with its Tier 3/Stage IIIA engines. Since then, the company has continued to demonstrate industry leadership by developing solutions that consider not only fuel economy, but also total fluid economy. Total fluid economy takes into account an engine’s total fluid consumption, including diesel fuel and additional fluids such as diesel exhaust fluid (DEF).

For Tier 4 Final/Stage IV, John Deere will offer its familiar PowerTech displacements of 2.9L, 4.5L, 6.8L, 9.0L and 13.5L. Power ratings throughout the lineup will, in some cases, be higher than previous offerings.